The Patriots of Pike Liberal had three players in double digits in a 59-47 victory over Hooper Tuesday night in Troy on Senior Night.

As Douglas Hawkins, Jared Henderson, Alex Adams, Phillip Quincey and Brock Collier were honored in their final home game, junior Justin McLaughlin stole the show by scoring 23 points and grabbing eight rebounds to lead the Patriots (10-10, 5-6 AISA Class 3A, Region 1) past the Colts.

“That is a big win for us,” PLAS head coach Mike Barbaree said. “We have been playing too good to have a letdown like yesterday stop our momentum so it was good to see them play well tonight.”

After falling down 3-0 early, the Patriots grabbed a 10-9 lead with 3:55 to play in the first quarter and never trailed again.

Ross Hixon chipped in 13 points and four rebounds in the win. Henderson had 11 points, Hawkins had seven points and Adams had six points and five rebounds. 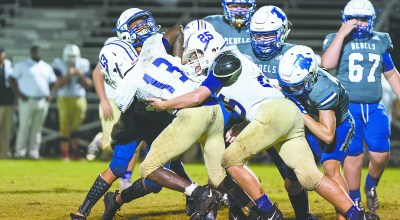