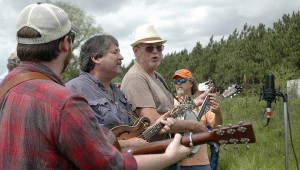 Bluegrass music could be heard on the Springhill “exit” of the Henderson highway around noon as people gathered for the unveiling of the sign at would designate the highway as the Rex Locklar Memorial Bluegrass Highway. Brandon Bostic, Mark Carter, Bobby Jackson and Ben Hughes were among the pickers. 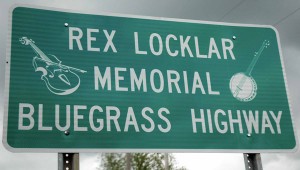 Rex Locklar would have been proud.

“And, he would have been humbled,” said his widow Faye Locklar. “Rex didn’t like a lot of attention but he would be glad to know that bluegrass music is still alive around here.”

A large crowd of Locklar’s family members and friends gathered at noon Friday for the unveiling of the sign that now designates the Henderson highway between Glenwood and Springhill as the “Rex Locklar Memorial Bluegrass Highway.”

Storm clouds rolled as the crowd gathered for the ceremony but someone said aloud what, perhaps, others were thinking, “Rex is up in heaven and he’s holding the rain off.”

For 44 years, Rex Locklar was known as “Mr. Bluegrass’ around these parts and beyond.

Each year, he hosted Rex’s Bluegrass Festival at the Henderson Music Park in the blink-and-miss-it community.

The old Henderson Schoolhouse provided an indoor facility for the biennial pickin’ and grinnin’s for many years. When the schoolhouse began to fall in, the pickers and grinners simply moved outside.

“Nothing was going to stop the music,” said Shelby Cargile. “We kept coming to Henderson because we loved Ol’ Rex and we loved bluegrass music.”

When Locklar died in February 2014, the music did stop for a while. But, then, out of love for Rex Locklar, his friends, Cargile, Pete Austin and Bobby Jackson wanted to find a way to keep Locklar’s memory and his music alive.

They approached Locklar’s brother, Wiley Locklar, and he talked with Pike County Commissioner Joey Jackson District 6 about the idea of naming the Henderson highway in memory of his brother. The idea took off.

“I was all for it,” Jackson told those who gathered for the unveiling of the road sign. “I don’t know of anybody that didn’t love Ol’ Rex. Commissioner Ray Goodson and I share this road and Ray liked the idea. We started asking people on the road what they thought and they all said, ‘Yeah. It ought to be named for Ol’ Rex.’ We got a petition out and a whole lot of folks signed it. We presented it to the other commissioners and the vote was unanimous in favor or naming the road for Rex.”

Austin said the mission for the sign is as a reminder of Locklar and the music he loved so much and of all that he gave to the community over those many years.

Alan Boothe, a longtime friend of Ol’ Rex, said Locklar will continue to be missed by many.

“Rex was a dear friend and he had a lot of wisdom in his head,” Boothe said. “I enjoyed sitting at the store and talking with him. I liked to hear his interpretations of the times. I was blessed to know him as so many were. The naming of this highway is a fitting memorial to him.”