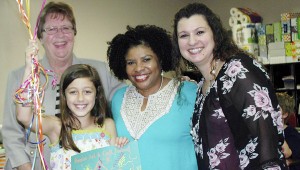 Anticipation filled the room as excited glances were cast from student to student. Something was going on.

Jordan is the chair of the annual TroyFest T-Shirt Design Contest so Woodham realized almost immediately that one of her students was the winner.

When Kate Nelson’s name was called a cheer went up that got Kate up and out of her desk.

“Congratulations, Kate, you are the winner of the 2015 TroyFest T-Shirt Design Contest,” Jordan said, as she presented the young artist with the bouquet of balloons. “Your design will be on the back of a million t-shirts recognizing our annual art and craft show. People everywhere will see you design.”

Jordan said Kate’s design was chosen from about 300 entries from students in grades one through five in the county’s public and private schools.

“All of the entries were very good and it was a hard decision for our judges,” Jordan said. “They made their decision based on the artwork and without knowing the names of the young artists.”

Jordan said Kate will be awarded the first 2015 TroyFest T-Shirt, will be recognized at the awards ceremony at TroyFest and will receive TroyFest dollars to spend at the annual arts and crafts show April 25 and 26 on the square in downtown Troy.

Kate said she was surprised when her name was called but also very excited.

“My art teacher (Carol Goff) told me that I should enter the contest. I didn’t think that I might win, but I’m happy that I did,” Kate said. “I like to draw different kinds of things and just thought up what I wanted to draw for the art show.”

Kate said she thought a star with lots of swiggles around it would be a good way to show there’s a lot to do at TroyFest and it’s all a lot of fun.

Woodham said Kate is a smart and creative student.

“She’s an all around good kid and I’m very proud of her as the winner of the TroyFest T-Shirt Design Contest.