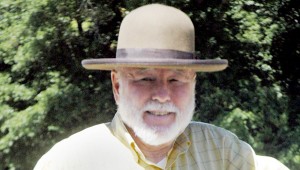 Messenger Photo/Jaine Treadwell
Bob McLendon is the event coordinator for the 150th anniversary of the “Ambush at Hobdy’s Bridge” on May 16 and 17.

The Pioneer Museum of Alabama will host the 150th anniversary of the “Ambush at Hobdy’s Bridge” on Saturday and Sunday, May 16 and 17.

Museum hours will be 9 a.m. until 5 p.m. on Saturday and from 1 until 5 p.m. on Sunday. The re-enactment of the ambush at Hobdy’s Bridge will be at 2:30 both days. Authentic re-enactors will portray Union and Confederate soldiers, including mounted cavalry. There will also be authentic camps and other living history displays.

Bob McLendon, event coordinator and member of Pvt. Augustus Braddy Camp 385, an event sponsor, said, for decades, people living in Barbour and Pike counties, have heard rumors of a fight between Union and Confederate soldiers at Hobdy’s Bridge.

McLendon said on May 19, 1865, soldiers of the First Florida Cavalry (Union) were ambushed by Confederate stragglers while crossing Hobdy’s Bridge.

“Cpl. John W. Skinner of First Florida Cavalry was killed and three Union soldiers were wounded and were the last casualties of the war,” McLendon said. “We encourage everyone to come to the Pioneer Museum on Mary 16 and 17 as we commemorate an important historical event that Alabama should be recognized for.”

The skirmish will be portrayed by Phillips Legion Cavalry and the 15th Alabama Infantry.

Admission to the “Ambush at Hobdy’s Bridge” will be $6 and will also include admission to the Pioneer Museum and to the Conecuh River Depot Military Museum.

“Ambush at Hobdy’s Bridge” is sponsored by the Pvt. Augustus Braddy Camp 385, Sons of Confederate Veterans and the Elizabeth Buford Bashinsky Chapter 236, United Daughters of the Confederacy and is supported by the Alabama Division.