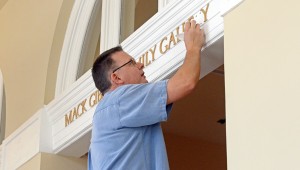 MESSENGER PHOTO/COURTNEY PATTERSON
The Johnson Center for the Arts will celebrate the arts center’s Donor Appreciation Day from 2 until 4 p.m. Sunday and the public is invited. Jeff Ryan with Blockwire Manufacturing in Goshen places letter at the main gallery’s entrance in preparation for Sunday.

The Johnson Center for the Arts will celebrate the arts center’s Donor Appreciation Day from 2 until 4 p.m. Sunday and the public is invited.

“The Johnson Center for the Arts has been the recipient of so many good things lately, and we have many people to thank,” Pritchett said. “We could think of no better way to thank them than with a community reception.”

Pritchett said the most recent donors to the Johnson Center are the Mack Gibson family, the Manley and Mary Johnson Foundation, Caleb Dawson, the Campbell family, Regions Bank and Tom and Frankie Brantley.

“The Mack Gibson family dedicated the Main Gallery of the Johnson Center and Mack and Mary provided funding for the new hardwood floors in the Main Gallery,” Pritchett said. “The Gibsons have provided invaluable service to our arts organizations over the years, and we certainly want to thank them for their continuing support.” 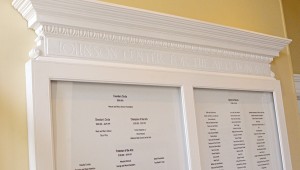 MESSENGER PHOTO/COURTNEY PATTERSON
The Johnson Center for the Arts will celebrate the arts center’s Donor Appreciation Day from 2 until 4 p.m. Sunday and the public is invited. Caleb Dawson built a replica of the original door frame featured in the Johnson Center to create a display case to show all the names of the donors.

Pritchett said the Manley and Mary Johnson Foundation also provided funding for the hardwood floors at the Johnson Center.

“Manley and Mary Johnson have been strong supporters of the Johnson Center from the beginning,” she said. “The Johnsons gave a substantial donation to have the arts center named in memory of his parents, Holman and Ethel Johnson, and they, too, continue to support the Johnson Center.”

Dawson constructed the art center’s new membership and donor wall cabinets and was challenged to match the original woodwork in the former post office.

“Caleb is a very talented and he was able to match the cabinets in a style that is harmonious with the 100-year-old building,” Pritchett said. “The cabinets are a wonderful addition to the Johnson Center.

“The mural, by noted Troy photographer Holman Johnson, is eight feet wide and five feet high and is a triptych, which is a set of three panels,” Pritchett said. “The mural had previously been on display at Regions’ Downtown Troy location.”

The donor celebration will also recognize Tom Brantley and his wife, Frankie, of Dothan for their donations of the Johnson Center’s bronze and marble gallery plaques.

“The plaques utilized marble from Troy’s historic U.S. Post Office,” Pritchett said. “We are deeply appreciative of the support of all of those who have made recent donations to the Johnson Center, as well as those who contributed in the past. We hope that everyone will join us in showing our appreciate to the donors from 2 until 4 o’clock Sunday afternoon.”

Hosts for the celebration will be the Johnson Center Board of Directors, members, and staff.