Love squared: Nell Stinson remembered on square at a… 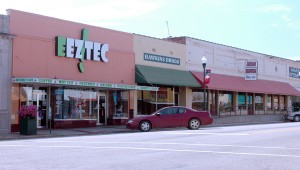 The City of Brundidge is looking to rebrand themselves from the “Antique City” to something that will make it a “destination city,” in the words of Dixie Shehane, BBA president.

The rebranding of the City of Brundidge was the main topic of discussion when representatives of several organizations met Monday to brainstorm ideas of ways that each could contribute to the revitalization of the city’s downtown area.

Dixie Shehane, BBA president, said that Brundidge needs to become a destination city and, to do that, the city needs to drop its previous branding as “Antique City.”

“There was a time when we could be called ‘Antique City’ but that is no longer true,” Shehane said. “We need to find a way to bring people off Highway 231 and into town. To do that, we need to rebrand our city.”

“We need to find a brand that will work for us and rally around it,” Jackson said, adding that local support is key to the success of any business or event in the downtown area.

“Elba is participating in the Alabama Main Street program and that could be something that we might want to look at as a way to revitalize the downtown area.”

“If motorist realized they could just ‘loop’ through the downtown area without a lot of lost travel time, that could be an incentive,” Sauer said. “Also, there are grants that are available for downtown revitalization projects. Grants are good ways to get additional money for projects that will benefit the entire community.”

A large number of ideas were tossed around including a farmers market, dog park, splash park, and a park with a fountain, the greening of the downtown area and a focus on the arts — folk and fine.

Britt Thomas, Brundidge city manager, said no matter how the city is branded or how it’s done, it’s going to take people with visions and dollars to invest to make it happen.

Chuck Caraway and Olaf Lieb, both BBA members, are men of vision who have recently invested in Brundidge.

Caraway is owner and president of Southern Classic Food Group and is in the process of opening a restaurant, Collier’s on Main, and an event center in the downtown area. Lieb owns and operates Eeztec, an Internet café, and the “soon to open” Three Frogz (recording) Studio, both on Main Street.

Caraway said that to be successful in the restaurant business it has to be different enough that people want to come.

“You cannot be somebody else,” he said. “You have to be different.”

Caraway said when people come to Collier’s on Main, he wants them to see something new and that’s what he plans to offer – a unique dining experience with great food, outstanding service and something different.

Lieb agreed that people are looking for something different and a place with atmosphere.

“By adding trees downtown, that would make the city more attractive and inviting and encourage people to walk around town,” he said. “At night, we could put lights in the stores to make the town look alive. There are many things that we could do to encourage people come downtown. And, the arts. The reason I came to Brundidge was because of the artistic feel of the town. It is a great place for the arts.”

Lawrence Bowden, Brundidge Historical Society president, said whatever brand the city chooses, it is imperative that it is one that will being people from out of town into town.

“To be successful with any brand, we have to entice people off the roads and into Brundidge to look and to buy. It doesn’t matter how beautiful the city is, if nobody is spending money here, we are not going to be successful no matter how we are branded.”

Those who have ideas about the rebranding of Brundidge is encouraged to jot their ideas down and drop them off at Brundidge City Hall.