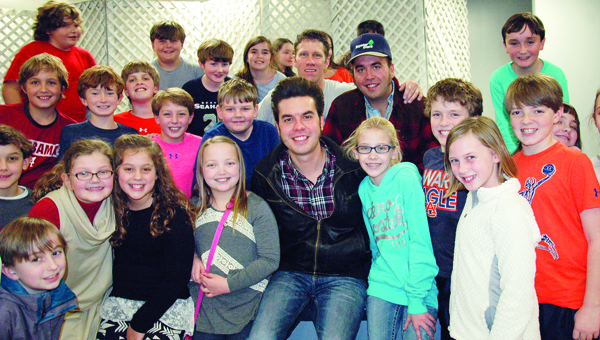 As an event of its outreach program, the Troy Arts Council arranged for the Malpass Brothers to present a preview concert at Pike Liberal Arts School Tuesday afternoon. The students enjoyed the brothers’ rockabilly music and also their old time country music. The TAC presented The Malpass Brothers in concert at the Claudia Crosby Theater on Tuesday night.

The Malpass Brothers had the students at Pike Liberal Arts School clapping and singing along and even a few dancing in the aisles Tuesday afternoon.

The Malpass Brothers most often sing old time country music but they saved that for Tuesday night and presented more of a rockabilly program at PLAS.

Christopher Malpass said they wanted to play music at the school with more youth appeal. However, the brothers were a little surprised at the show of hands when the students were asked if they knew Hank Williams Sr. and Johnny Cash.

“It’s so encouraging to have young people come to our shows with a new interest in our ‘old music,’” Malpass said. “Being able to introduce what we love to another generation feels like a great accomplishment for us. We want this music to be around for our children’s children.” 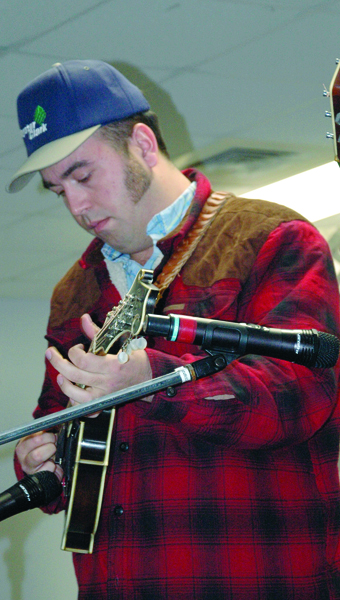 Alabama is fertile ground for “growing” interest in old time country music. And the brothers liked being in rural South Alabama.

“We haven’t been to Alabama many times but we love coming here,” Christopher Malpass said. “We’ve sung at the Hank Williams Museum in Montgomery and a few other places. Alabama fells like home. Like we’re with family.”

Malpass said much of their musical inspiration comes from Alabama.

“Hank Williams and the Louvin Brothers, you don’t get any better than them,” he said. “We pay tribute to the original Grand Ole Opry-style of music because it comes from the heart. It has depth and truth. It takes us back to our country roots.”

When you’re 26 and 30 years old, your roots aren’t that far back. However, the Malpass brothers “don’t just sing retro, they are retro.”

“We sing retro and we live retro,” Malpass said. “Taylor even works on a tobacco farm. Everything we do and everything we have is retro – our cars and our houses.”

Christopher drives a 1964 Ford Galaxy and Taylor drives at 1970 Ford pickup. They both live in houses built in the 1960s and Christopher’s house has no television.

“My wife wasn’t really into retro when we got married but she is now,” he said. “We had a television but the only show we watched was ‘The Andy Griffith Show.’ Shows like ‘Andy’ and ‘Bonanza’ were good stuff. We got rid of the TV and haven’t missed it at all. What they have on television now is pathetic.”

“A simple live is a better life,” he said. “Life should be lived simply. Life today is too complicated. I don’t want to live a complicated life.”

When the Malpass Brothers take the stage, Christopher Malpass is always up front with their audiences. He gives notice that they are from rural North Carolina and that they talk funny. Then, they entertain the britches off folks.