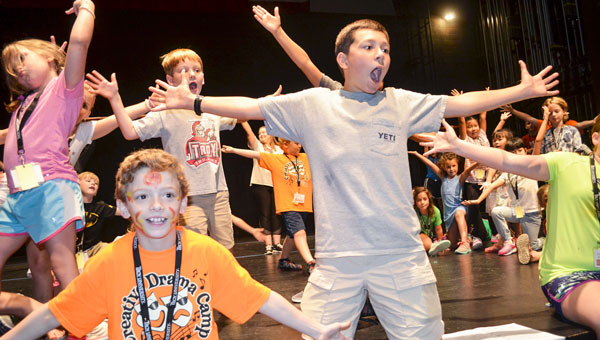 Woody Fipps, right, will play the role of the Older Simba in the Creative Drama Camp’s showcase production of “The Lion King” at the Claudia Crosby Theater Friday night. Brady Singleton, left, will perform as Timon.

Imagine what it would be like to be among 100 kids preparing to sing and dance and flip on stage before an audience packed with adoring mamas and daddies? Or to be behind the scenes making sure those 100 kids were ready to go on stage to sing, dance and flip?

Bryce Tatum knows exactly what it’s like to be both.

Tatum has been attending the Summer Spotlight camps at Troy University since he was a kid. Now a tenth grader at Goshen High School, he has aged out as a camper but has stayed on as an apprentice at the Creative Drama Camp that is underway this week for ages 4-13.

“Summer Spotlight has meant so much to me,” Tatum said. “I love the theater and want to be a part it. I like being on stage and I like working behind the scenes. I even like preparing for the camp. Summer Spotlight has been a great learning experience for me and I’m sure it is for these kids, too. And, it’s fun.”

Tatum laughingly said that, as a camp apprentice working with the young kids, he has realized that “someone had to put up with me.”

Tatum said there are no words to describe what the Troy University Summer Spotlight camps have meant to him.

Maybe just being there says it all. 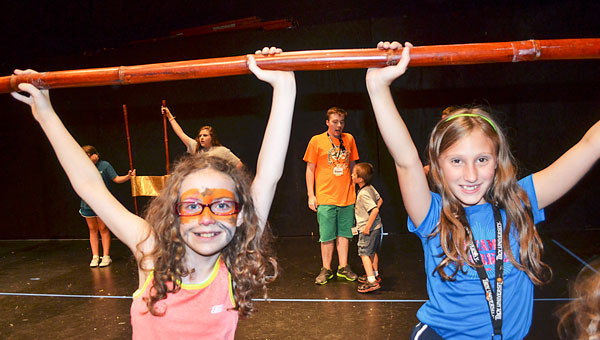 Kat Petty and Sarah Taylor have had a great time with the Limbo at the Creative Drama Camp at Troy University this week.

Josh Feemster, a member of the Creative Drama Camp staff, agreed that the camps have a far-reaching impact for the kids that attend.

Although, they are not all going into theater, the camp is good learning experience,” he said.

The campers learn to follow directions. They learn about teamwork. They participate in arts and crafts projects and experience creative dance. But most of all, they learn to always try their best in whatever they are doing – to not hold back. Give new things a try.

“The Lion King Experience for Kids.”

Feemster said the campers are having a lot of fun learning about the Lion King and about the characters in the delightful story and how to tell their story on stage.

“All the kids are anxious to perform for their families and are working really hard to get ready for Friday night,” he said. “It will be exciting to see what these kids have accomplished in just a few days. It will be a great show.”

The showcase performance for the 2016 Creative Drama Camp will be at 7 p.m. Friday at the Claudia Crosby Theater on the campus of Troy University. However, it’s only for families and friends of the campers. But, don’t be surprised to see some of these campers on stage some other time and some other place.