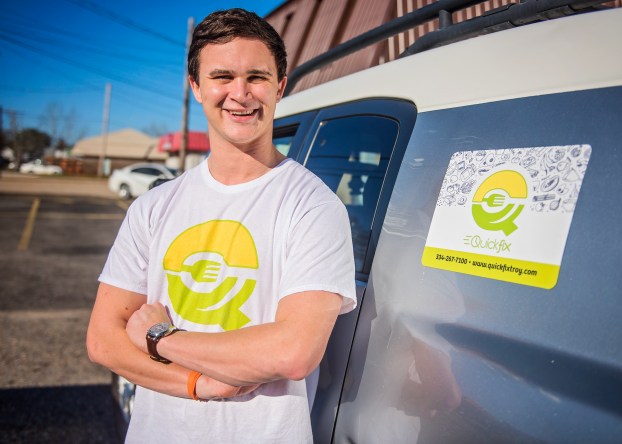 When first looking at Quickfix, people might think the food delivery service is a big corporate company that has recently brought a location to Troy.

In reality, Troy is the only city in the world with Quickfix, which was picked up by Troy University senior marketing major Clay Copeland in October after he realized there was no similar service in the area.

“I kind of had the idea one day when I was sitting around on the couch and didn’t want to do anything,” Copeland said. “I’m thinking ‘Why doesn’t Troy have the opportunity for us to order food? It’s ridiculous, this is a college town.”

The service had been started in Troy in 2016 byMichael Talerico, who brought in friend Peyton Kirkley to help run the business. Copeland purchased the service from Talerico and Kirkley recently. Copeland said he has always had an entrepreneurial spirit.

“When  was 13 I had a four-wheeler with  a trailer and a lawnmower and knocked on very door in my neighborhood and asked them to cut their grass,” Copeland said. “By the time I was 15 I had raised enough money that my dad told me whatever I saved up, he’d double it and buy my first car. I was able to save up $4,000 and he got me the car. That was the first entrepreneurial thing I did.”

When the opportunity to begin his own business right here in Troy, Copeland said he didn’t hesitate. “I’m loving it,” he said.

Copeland said he saw food delivery as a growing market and a service that many people would use.

“You have some people that will get it delivered that normally wouldn’t want to go out to eat, but you also have many customers that enjoy going out to eat but sometimes they would rather just have the food delivered to the comfort of their homes,” Copeland said.

Copeland said the business has already seen tremendous growth since he began delivering in October 2018.

“We had 55 orders in the month of October and right now through January we have delivered over 700 orders,” Copeland said. “We’ve gone from averaging 7 orders a day to about 18 – I expect that to be up to 35 to 45 per day by March easily.”

Quickfix doesn’t just deliver food either. “We’ll pick up toilet paper for you if you need it,” Copeland said.

Early on Copeland was doing most of the deliveries, but with the quick growth of the service, he has expanded to eight drivers already that can answer a text or call and pick up food. Copeland said he is planning to expand the service to other college towns and grow into a larger company.

“I branded it to look like a corporate company like Uber Eats,” Copeland said. “I believe I can be a big company if I want to be. So many people have doubted me, but that motivated me to work even harder. I plan to keep it going … I found the formula for success is to double your rate of failure. If you’re not afraid to fail, there’s nothing that can stop you. You can chase, follow and achieve your dreams. I want to inspire young men like myself and young women like myself to have the opportunity to run their own show at other small colleges throughout Alabama.”

Already, Copeland has seen a diverse customer base from college students to senior citizens.

“A guy from Birmingham called me to ask to take his girlfriend flowers and skittles.,” Copeland said. “Recently a man called me from North Carolina and says his mom is 80 years old. He said she doesn’t really cook anymore and doesn’t like to drive or leave the house because it scares her and that he will probably be ordering every day from us to make sure she eats. There are people out there that can’t get their own food.”

Copeland said he’s not concerned about the possibility of corporate competition.

“That will just increase the awareness of the food delivery market,” Copeland said. “Sure they’ll get some of the orders, and that’s good for them, but more people being aware will bring more attention to Quickfix too.”

There are multiple ways to order from Quickfix in the Troy area. Hungry customers can go to www.quickfixtroy.com or call or text 334-267-7100 to order. Quickfix can also be found on Instagram as quickfixtroy.