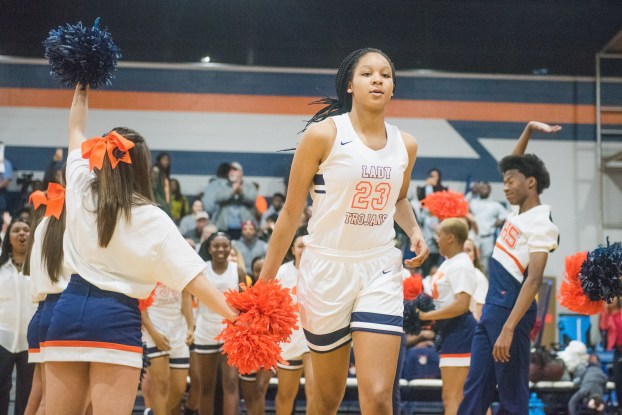 Photo/Jonah Enfinger Maori Davenport made her triumphant return to the basketball court at Charles Henderson High School after being ruled ineligible by the Alabama High School Athletic Association in November 2018. Davenport had played just four games of her senior season and the AHSAA twice upheld the ruling when CHHS appealed.

As of right now, a hearing to determine the eligibility of CHHS senior standout Maori Davenport is still scheduled to be held at the Pike County Courthouse Friday.

That may be about to change very soon.

Last week, the Alabama High School Athletic Association filed a motion to have the case moved to Montgomery County based on a consent form signed by Maori and her parents, or to have the case completely dismissed.

Today, the Davenports filed an amendment to the initial complaint and a request to delay the hearing.

Carl Cole, attorney for the Davenports, said the motions were filed for several reasons, including the opposition of the change of venue and dismissal of the case.

“They’re basing their change of venue request on a player participation form that we don’t think is binding upon Maori,” Cole said. “They’re asking court to dismiss the case entirely, basically saying the court doesn’t have jurisdiction at all because they’re a voluntary and private organization; everybody should stay out of their business. We believe they’re more akin to being a state agency than anything else if that’s the case, we’re entitled to have judicial review of their decisions. It’s going to take a while to figure those things out.”

According to the motion, the Davenports had to sign a player participation agreement that binds them to having claims heard only in Montgomery County.

“The plaintiff intends to challenge the AHSAA participation form and arguments related to venue premised on that form due to the form being a contract of adhesion that is compulsory for any athlete to be allowed to play sports, therefore, depriving the plaintiff of any bargaining power or consideration typically necessary for a binding contract,” the motion reads.

The amended complaint argues that the AHSAA is not a private and voluntary organization, but a “state actor.”

“The AHSAA is a state actor for purposes of the Due Process and Equal Protection clauses of the Alabama Constitution,” the motion reads. “The plaintiff is affirmatively challenging any precedent that the defendants are entitled to heightened judicial deference or judicial restraint.

“Such precedent is based on a misapprehension that the AHSAA is a voluntary organization. In truth, the AHSAAA in its current embodiment and through its current conduct is not a voluntary organization. Even though the AHSAA was founded in 1921 as a private association, it has evolved into a state actor. The AHSAA regulates athletics for 780 high schools, middle schools and over 150,000 student-athletes, all the while using state dollars and state facilities. Schools effectively have no choice but to join the AHSAA to be allowed to take part in athletics.

‘The AHSAA engages in state action when it enforces its rules against member schools and student-athletes. The association’s regulatory activity should be treated as state action owing to the pervasive entwinement of state school officials in the structure of the association.

“ … plaintiff contends that that the AHSAA, based on the facts surrounding its existence today, should not be afforded any judicial deference at all.”

The plaintiff’s request to extend the temporary restraining order and continue the hearing for a later date has not yet been ruled on. No specific date has been requested for a new hearing. Instead, the plaintiffs have asked to have a scheduling conference to come up with a new set of dates.

“The most important thing in all this is that the AHSAA has made it clear they’re going to fight this and we have to build a record for the (Alabama) Supreme Court to take on appeal as a practical matter,” Cole said. “The one day set aside for this is not going to suffice. We need to get some guidance on how we’re going to streamline this thing.”