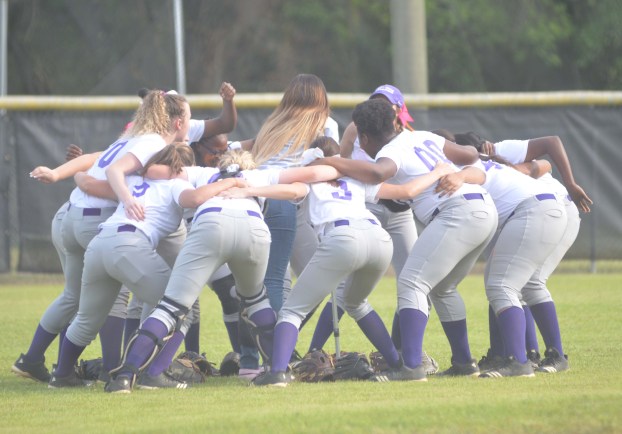 Messenger Photo/Mike Hensley The Pike County Lady Bulldogs will take on Hale County in the opening round of the regional tournament on Thursday morning.

After securing a berth in the regional tournament, the Pike County Lady Bulldogs immediately got to work on improving their defense. With the tournament set to begin on Thursday, it’s the offense that may play the biggest role for coach Rebecca Kidd and the Bulldogs.

The Bulldogs will open the East Central Regional against Hale County on Thursday morning.

“We have been preparing defensively,” Kidd said. “Just really working on our defense and we had some changes in our positioning and we have been working hard.”

The Bulldogs were forced to do some shuffling, and when they take the field on Thursday, their infield will consist of players in ninth grade and below.

“We have replaced the players and it has made our infield really young,” Kidd said. “That’s for getting us through the regionals and beyond. My infield will consist of, with the exception of pitcher, players in ninth grade and below.”

The younger, inexperienced players have played a key role for the Bulldogs all season long and Kidd hopes that trend will continue once again beginning oan Thursday.

“My young girls have really carried this team,” Kidd said. “Not taking away from my seniors because they have done a great job, but my young players have picked it up. When frustrations have come, the young girls have been the ones to pick up the team. They are doing the encouraging and really showing leadership.”

It is often said that good hitting is contagious, as is poor hitting. That has been the case for the young Bulldogs offense this season.

“If one gets a hit a good hit, they start building on each other,” Kidd said. “Being so young, if we start struggling at the beginning, it seems like they struggle throughout the game. I am batting a seventh grader fourth and it seems like if she gets a good hit right away, the whole team follows. It’s about them encouraging and showing the leadership.”

The team’s ability to hit will be the key factor in the Bulldogs’ success in the tournament.

“It’s going to be hitting,” Kidd said. “We have to have that confidence and the girls have to start off hitting the ball hard in the beginning. If we can get our bats going early we will be fine.”

Along with Hale County, the Bulldogs will be joined in the regional tournament by Beulah, Saint James, Pike Road, Gordo, Prattville Christian and Randolph County.

“We are on the tougher side of the bracket without a doubt,” Kidd said. “We will start off against Hale County. They are young as well; however, they are very experienced, a lot of travel ball and they have been very successful in the past. In the matchup after it will be either Beulah or Saint James and I hear they are pretty tough as well.”

Hale County and Pike County will square off at 9 a.m.