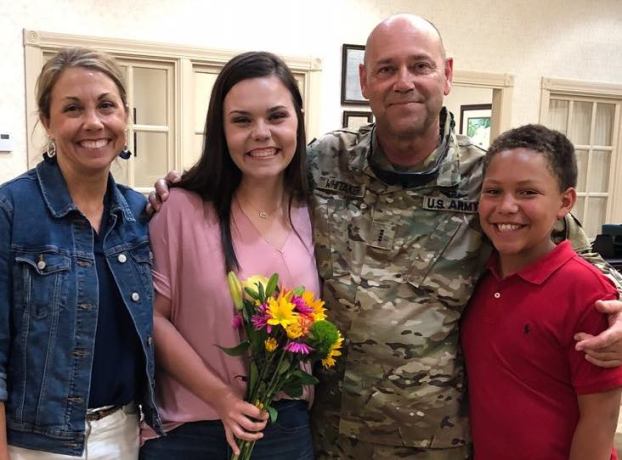 Steve Whitaker slipped into the back of the classroom at Banks Primary School just in time before school ended Tuesday after returning from his third deployment to Iraq.

His son, 10-year-old Garrett Whitaker, didn’t expect his father back until the next week.

“I was really shocked,” Garrett said. “I’ve had lots of dreams about him coming home, but I always wake up and wish it was not a dream. When I saw him I freaked out because they told me he was coming home next week.”

But nobody had to pinch him – his dad really was home a week early, a hidden surprise he and his wife Shondra Whitaker had planned for the children.

“(Shondra) kind of arranged all this and had the planning and coordination,” Steve said. “It just worked out with the timing that I could see him at school and then go to the bank to surprise my daughter. We had never had any opportunities to do that with my previous two deployments.”

Steve’s stepdaughter, Lydia Harrison, was at Troy Bank and Trust where she has been interning.

“The bank does a “friendly faces” post on Instagram and Facebook every Friday, so they told me this was the week they were going to focus on me,” Lydia said. “I thought they were taking my picture for that.”

Then Steve walked around the corner carrying flowers for her and she jumped up to hug him.

“Lydia isn’t as emotional, so that was a big surprise,” Steve said. “It was very heart-warming … It’s hard to put into words how much you miss each other when you’re apart. Each one of us has our own key talents, and skills – we kind of fit together like pieces of a puzzle. When you’re apart, it’s like a piece is missing.”

Lydia was most excited that he was home in time to see her graduate, not just from high school, but from college.

“I graduate college (Thursday night), so the fact that he’s able to be here for that is amazing,” Lydia said. She graduated with her associate’s degree at Enterprise State Community College Thursday through the academy system at Pike County Schools.

Shondra said she loves having Steve back home and especially enjoyed the opportunity to surprise the children with his return.

“It’s almost better than Christmas,” Whitaker said. “Their reactions were priceless. It’s really good to have him home. It’s hard to be a working mom with two children.”

“I’m surprised mom was able to keep it a secret,” Garrett added.

Steve is a med-evac instructor pilot with the National Guard and served in that role on his deployment. He said it is always difficult to get readjusted to civilian life after being away in a foreign land.

“This time especially it seemed a little surreal, like I stepped out of one life directly into another,” Steve said. “For the family here, their lives kind of go on as normal. The guy in deployed life has to make a big shift into a full-time duty life. Then you have to step right back into civilian life when you come home, especially in the National Guard.”

The family had another­ special moment Wednesday night at the Troy-Alabama baseball game, being honored on the field.

“It was awesome,” Garrett said. “We got to watch the game and then walk out on the field, and then we were able to hang out with the players in the dugout.”

Steve said he appreciated the warm welcome from the entire community.

“Troy is kind of like a village,” Steve said. “It’s not just your immediate family you’re coming back home to but your community family and your church family; they’re all very important while you’re gone. I just appreciate the welcome home.”