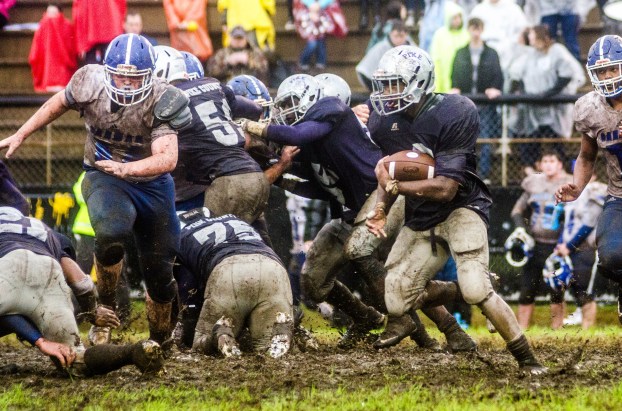 Messenger Photo/Jonah enfinger The Pike County High School Bulldogs will close out spring practice on Friday with a scrimmage against Ariton.

Bulldogs close out spring with Jamboree

The Pike County Bulldogs have made it a norm to use spring practice as an opportunity to regroup and get to know their new crop of players. With key players no longer on the roster, this spring has been no different.

The Bulldogs will wrap up spring practice this week and play in a jamboree against Ariton on Friday night in Brundidge.

“It’s been going alright,” said coach Fred Holland. “We are working with a lot of young guys. We have a couple returning guys. Spring is always slow as far as things we are doing. We don’t change a lot of things, we try to introduce the new guys to our program.”

The Bulldogs have tried to take things slow with the new crop of Bulldogs, but with a short amount of time to work with, Pike County has been forced to pack a lot of work into just 10 days.

“We have just 10 days,” Holland said. “You don’t get a chance to put in a lot of things. Basically, we have taken things slow, making sure we get through spring and transition into the summer.”

The Bulldogs no longer have key seniors on the roster, including quarterback and leader Jaidyn Wilson, who will graduate later this month. Even in his absence, Holland believes he still has plenty of leaders on the team.

“Replacing Jaidyn will be tough, especially his leadership,” Holland said. “I think we have some guys that will come along and do some of the things that his capable of doing, but it will take some time. When seniors leave, we always expect the next group of seniors to come in and help the young guys out. I think it’s coming along good.”

Rayshawn Reynolds, who saw some time at quarterback last season will get reps at the position again leading up the start of the season. He will share time with two other quarterbacks.

It’s still a work in progress on the defensive side of the ball for Holland and the Bulldogs.

“We are coming along OK,” Holland said. “We still have some key spots that we need to work on. We are working some guys over there. We have some guys returning so it will help with the transition with the new guys. I think we will come along with time.”

The Bulldogs will use this spring game, like many teams, to see where they are both offensively and defensively, but unlike most spring games, the Bulldogs will run through special team plays at live speed in order get a feel for the unit.

Kickoff between the Bulldogs and Purple Cats is scheduled for 6 p.m. at Bulldogs Stadium in Brundidge.