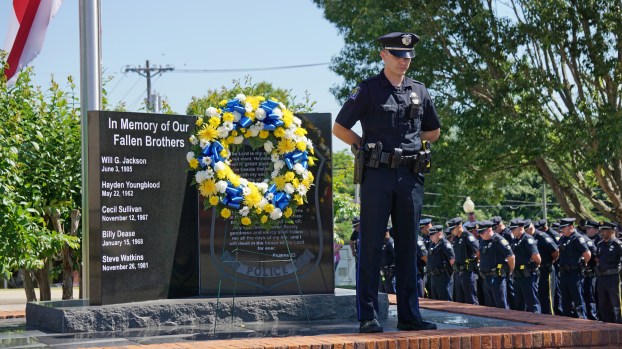 “Today is a day of remembrance, of solemn reflection, and of resolve,” said Mayor Jason Reeves Wednesday at the 41st annual Police Memorial Ceremony. “It’s important that we remember. This beautiful monument is here to remember.”

Reeves was speaking to a gathered assortment of Troy police officers, city officials and the residents who came out to show their support of the men and women in uniform that risk their lives in service to the city.

“There’s not a day that goes by that we don’t think about the officers who paid the ultimate sacrifice, but this day is set aside specifically for that,” said Troy Police Chief Randall Barr. “That monument out there is the first thing we see when we begin work and the last thing we see when we leave. It is a vivid reminder of the job that we do every day. Everybody can’t do the job that police officers do. Like a lot of other things, it’s a calling; it takes a special person to do what we do every day and deal with the things we deal with.”

“Everyone that has come out to this ceremony is special, especially to Ms. Watkins and her family,” Reeves said, speaking of the family of Steve Watkins. “More and more time passes from that solemn day in 1981. Since then, 41,500 shifts have been changed without an officer dying in the line of duty. It’s important as time goes by that we reflect, we remember and we resolve for everyone to go home at the end of their shifts. So many now were not even born the last time we lost an officer; we need to do all that is humanly possible for the men and women in uniform to continue that.”

Barr said it is a challenging job, but also rewarding.

“This job will bring you extreme joy when you’re able to help others, that’s the reason most go into that,” Barr said. “Sometimes it brings great pain; we feel a lot of the pain that the families feel. It’s a very challenging job, but we’re very fortunate to have a good staff of men and women who want to come out and do this. It’s an honor to go to work and stand beside them every day. I’m proud of the work each and every one of them do every day.”