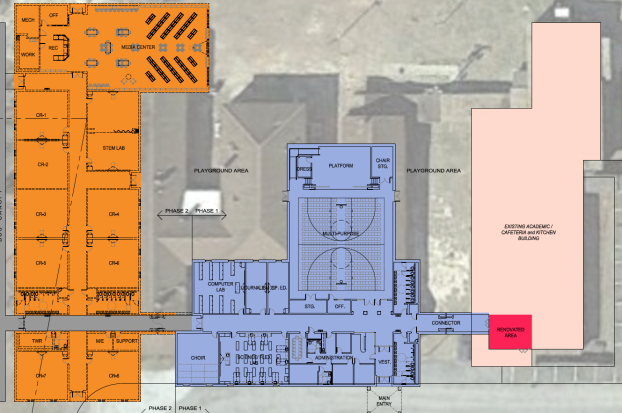 Pike County school board officials have developed a plan for the merger of Bank Middle and Banks Primary schools and are working toward securing funding for the $6.5 million project.

Superintendent Dr. Mark Bazzell said Banks Middle School was next on the list of buildings for the school system to replace as it was built in the 1930s and is due for an upgrade.

“Over the years, we’ve tried to prioritize our projects based on need and we’ve worked gradually over the years to eliminate those facilities that were the oldest and those that cost us the most to operate in terms of utilities,” Bazzell said. “Banks was next on that list. There are a lot of costs associated with maintaining that building.”

The school board announced the plans during a February meeting and have been working since then to plan the financing of the project.

“The legislature just completed their session, and throughout the summer we’ll be putting together our budget for FYE2020,” Bazzell said. “By September, we’ll have a good idea of how we’re going to end the FYE2019 budget. We’ll be able to look back at a full year of sales tax revenue, so we’ll have a better idea in the fall of what kinds of things need to happen for us to put together the funding piece.”

Bazzell said the funding would need to be secured for the first phase of the project, which he estimated will cost between $3 million and $3.5 million.

The first phase would be to demolish an existing portion of Banks Middle School and construct a new building that would include an administrative suite, larger multipurpose room, choir room, computer and science labs and more. The current building housing the kitchen and cafeteria as well as some classrooms would remain a part of the new school.

Bazzell said he hopes for construction on phase one to begin by mid 2020.

While the building is being constructed, temporary classrooms will be brought in for students to continue their normal schoolwork.

“What you don’t want to do is tear the building down and then wait three months for construction to start,” Bazzell said. “We want to time all that perfectly so that as soon as everyone is moved out construction starts, and as soon as construction is complete we can move people back in. We don’t want people in temporary structures for four or five months because we didn’t plan it and sequence it carefully.”

Once phase one is complete, another new building will be constructed including eight classrooms, a STEM lab and a media center.

After phase two is completed, the primary school students would begin attending the new facility.

“The good thing with that is those students can continue going to school at the other campus during that construction,” Bazzell said. They won’t be interrupted.

The combined school would offer increased security and safety while also giving all students the benefit of a modern facility.

“This will be state of the art facility with the latest technology, STEM classrooms, a choir room which is much-needed; it’s going to be large and spacious,” Bazzell said. “It will have new HVAC and lighting and all the things that come with a new building. It will be something to be proud of. We’re all really excited about this project.”