Goshen moving up to Class 3A beginning in 2020 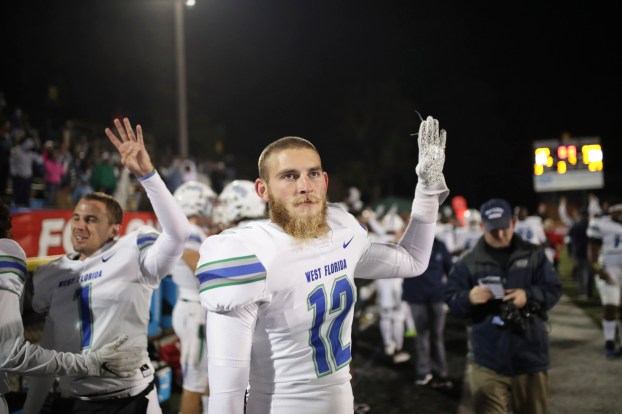 Photo/West Florida Athletics Former Goshen Eagle and current West Florida punter Dawson Hamlin gets ready for the fourth quarter during a game this season. Hamlin and the Argonauts will take on Minnesota State in the Division II National Championship on Saturday afternoon in McKinney, Texas.

‘Once in a lifetime’: Hamlin and West Florida heading to D-II National Championship

In December of 2017, Goshen kicker Dawson Hamlin, along with the Eagles, was hoping to earn a spot in the class 2A state championship. Two years later, Hamlin has an opportunity to play for a national championship.

Hamlin and the West Florida Argonauts will play in the Division II National Championship against Minnesota State on Saturday in Mckinney, Texas.

Saturday will be the Argonauts’ second trip to the national championship in the last three seasons. They lost to Texas A&M-Commerce in 2017.

“It’s a once in a lifetime deal and I’m super thankful,” Hamlin said. “This team has been in the national championship two times in four years; that’s historic. We are coached by one of the best coaches I have ever been around. This is incredible and I can’t express it enough.”

Hamlin and the Argonauts finished the regular season 8-2 and advanced to the Division II postseason.  West Florida knocked off Wingate, Valdosta State and Lenoir-Rhyne, all three of which were ranked higher in the region. West Florida defeated Ferris State in last week’s semifinal.

“We played Wingate and beat them handily, but then we had to play the defending national champions of 2018,” Hamlin said. “That entire week our coach told us that we don’t need you to be super human; just do your job. We had a tight game there and after that game, we knocked off the top three teams in the United States. We’ve been underdogs the entire way.”

Hamlin and the Argonauts are matching up with the undefeated Minnesota State Mavericks who come into the game 14-0.

“They are an all around solid team,” Hamlin said. “We think we have a real shot at this. It’s just like Valdosta State; do your job. I am very grateful God put me in this position and I’m going to do my job.”

Hamlin has handled the punting responsibilities this season. The sophomore has 48 punts under his belt so far this season. He is averaging 43.8 yards per punt. He has nine punts of over 50 yards with a long of 58 yards. He has two touchbacks and 21 punts that ended inside the opponents 20-yard line.

“I feel like I have had my best year of football probably in my entire life,” Hamlin said. “I have really been able to relax and do my thing.  There is nothing I can do after the ball leaves my foot except leave that part to God. I try to put in the work and after it leaves my foot not worry about it.”

The game can be seen on ESPNU beginning at 2 p.m. on Saturday.