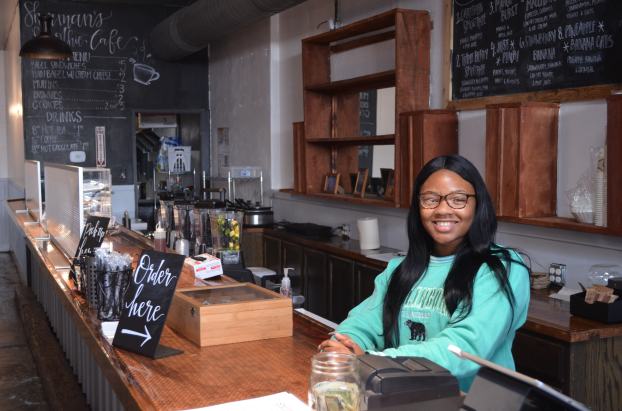 Charmin Harvey never grew up expecting to be the entrepreneur in the family.

“My dad was an entrepreneur with his moving business, and I always thought my brothers would be the ones to open their own businesses first; so this is pretty shocking,” Harvey said.

And Harvey isn’t even in school to study business. She is working towards a bachelor’s degree in digital forensics within the criminal justice field.

So what led her to open Sherman’s Smoothie in Downtown Troy?

“I’ve been hearing as a student that we need a smoothie place, students especially” Harvey said. “We have some shake places around town, but everybody wanted a fruit-based smoothie place I’m a personal trainer and I have some experience in the food industry, so I asked myself ‘Why not?’ I kind of wanted something of my own.”

And, perhaps, her father’s entrepreneurial spirit lives on inside of her too.

Harvey said she named the cafe after her father, who passed away of cancer in 2016.

The store offers breakfast foods and soups in addition to smoothies, but Harvey said the smoothies are the main priority.

“I already make them a lot at home in the morning, so some of the boards are actually homemade – I prepare them myself,” Harvey said. “Some of them work as a meal replacement with natural proteins while others serve as a nice, healthy fruit drink.”

The business is currently open from 8 a.m. to 3 p.m. on weekdays, but Harvey said she is still experimenting with the hours.

A native of a small town in Georgia, Harvey said she expects she will eventually have to move on from the business as she seeks to go into the criminal justice field, but plans to leave the business to her mother to continue to run while she considers opening another store wherever she goes next.