Trojans close out regular season with win over Dale… 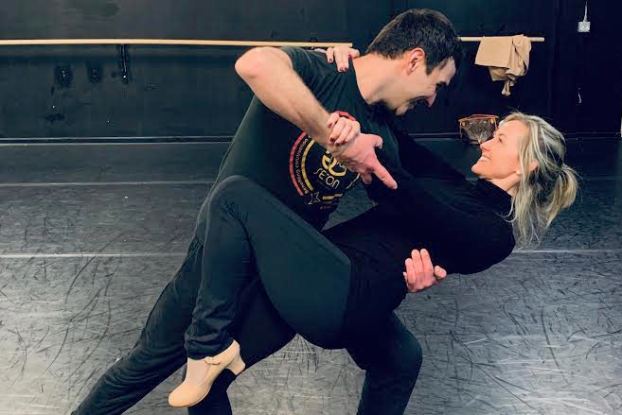 A NIGHT TO REMEMBER: ‘Stars’ working hard to prepare for Feb. 8 competition

“Dancing with the Stars: Troy Edition” will take center stage at the Claudia Crosby Theater on the campus of Troy University on Saturday, February 8.

And, it will be a night to remember and one with long-lasting benefits.

Kelly Sanders, event organizer, said Dancing with the Stars: Troy Edition is a benefit for the Patti Rutland Jazz Arts in Education Outreach Program, BEYONDance, which is in its third year at Troy Elementary School. All students in grades one through six are involved, weekly. Dancing with the Stars: Troy Edition will help fund the program at TES and, hopefully, help extend the program to other schools in the county, Sanders said.

For Kelly Sanders, dancing is nothing new. But organizing Dancing with the Stars: Troy Edition as a fundraiser for BEYONDance is a new venture.

“Being involved with BEYONDance at TES is encouraging and so rewarding,” Sanders said. “When you see the kids having so much fun dancing, how involved they are and how their eyes light up, you know it’s all worthwhile.”

Sanders said BEYONDance provides new opportunities for learning, the development of socialization skills and the fun of dancing.

“Dancing with the Stars: Troy Edition has generated a lot of interest and excitement around town and, hopefully, this will become an annual event,” Sanders said. “If so, the funds raised will provide opportunities for more students and at more schools to participate in and benefit from dance.”

The local “novice” dancers have had as much fun practicing their dances as the kids at school.

At least some moves he’s comfortable with, he said, laughing.

Bennett is no stranger to the spotlight. He is as comfortable on television talking about Wiley Sanders Truck Lines as he now is on the dance floor.

His professional dance partner, Christina Green, has taught Bennett some moves that accommodate his bad knee and bad foot.

And, no. Those are not excuses, Bennett said, laughing.  “I had foot surgery and had to wear a boot, so some people asked if I could dance. I said, ‘Can I dance? Yes, I can.”

Bennett said, as much as he has enjoyed dancing with a star and will enjoy the friendly dance competition, the real reason he is dancing is for the kids.

“When kids are excited and happy and dancing, it warms my heart and God smiles,” Bennett said. “I’m so happy I was asked to dance, even if I have two left feet. And, I’m blessed to work for people and with people that think about others and do for them.”

Jonah McWaters was, at first, more than hesitant about Dancing with the Stars.

“Dancing has never been my forte,” he said. “So, dancing on stage was not anything I wanted to do. But, I finally decided I would do it and I’ve had a blast.”

He and his professional dance partner, Erin Smith, considered several dance options and decided on hip-hop.

The clock is winding down to dance time.

“Am I nervous? One hundred percent,” McWaters said. “If I don’t remember the dance moves, I’m hoping that muscle memory will take over.

“I really didn’t want to say, yes, to this but I’ve had a blast. What I say to those who get this opportunity in the future is ‘just do it.’ It’s fun and for such a good cause. I’m glad that I didn’t say no.”

“We’re dancing to a pop dance that has a fast tempo. I just hope I don’t give out of breath,” she said, laughing.

Jackson said her dance partner, Elisha Burroughs, is an excellent dancer and a good teacher.

“I’ve learned a lot but I should have been practicing for five months. I just wish I could sing my way through,” she said.

The Jackson/Burroughs duo has a dip planned for their dance.

“I’m going to wear something pretty in case something goes wrong with the dip,” Jackson said, laughing. “I’m proud I was invited to be a part of a program that brightens the faces of children.”

“Dancing with the Stars: Troy Edition” is at 6 p.m. Saturday, February 8 at the Claudia Crosby Theater. Admission is $25. Tickets will be available at the door.  All proceeds support the local BEYONDance program.