Local seniors hoping for another chance to play 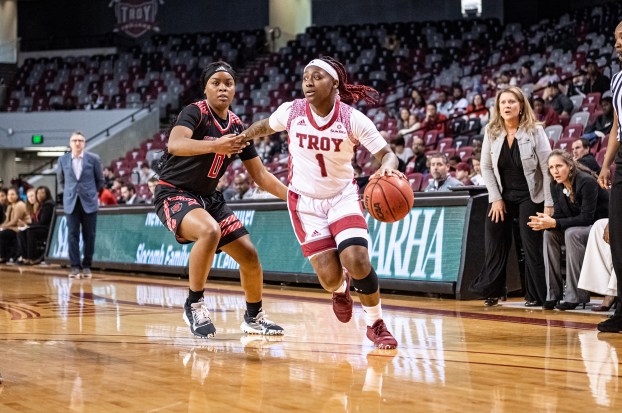 Photo/troy athletics Kayla Robinson drives to the basket for the Troy Trojans in a game against Arkansas State earlier this season.

The Troy Women’s basketball team rode into the Sun Belt Conference Tournament having completed their best regular season ever. A few days later their dreams of making it to the NCAA Tournament was dashed.

The COVID-19 coronavirus canceled both the SBC Tournament and the NCAA Tournament.

After learning the news the conference tournament was canceled, the Trojans were excited to learn that they would received the bid to the upcoming NCAA Tournament. The joy was quickly erased when they heard the news about the tournaments cancellation.

“We had the greatest season in the history of women’s basketball,” Troy Director of Athletics Brent Jones said. “25-4, two losses were to Top-25, Power 5 schools, simply outstanding. We had a chance, even without winning the conference championship to be able to get into the NCAA Tournament. That’s unprecedented.”

Despite all the accomplishments, Rigby and her team didn’t have an opportunity to celebrate in front of their fans. Jones announced on Thursday they will have that chance.

“We have five seniors that didn’t get the chance to cut the nets down at the end of their last game,” Jones said. “They didn’t have the chance to have the send off that we wanted outside of senior day. When the time is right, we will celebrate them like you won’t believe because they deserve it. Our community deserves it, our fans deserve it and our student athletes deserve it.”

Rigby hopes it’s a celebration that will include everyone involved, including the Troy University students as well as the fans in the community.

“We’re going to have a great celebration,” Rigby said. “We’re going to want all of our fans and all the Trojans to come out. It was a huge accomplishment this year. We’re going to cut the nets down and have the trophy, do the things we weren’t able to do.”