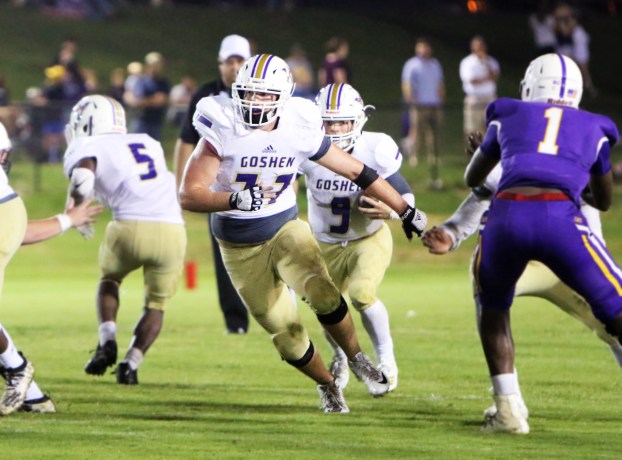 After announcing his decision to attend Illinois College earlier this year, McFarland will now join teammate Bryan Galloway on the South team’s roster in July.

“I was actually surprised by it,” McFarland said. “It was a honor being able to play one last time with Bryan.”

McFarland spent prior years blocking for his senior teammate, now he may get the opportunity to do it one more time on a large stage.

“It’s going to almost feel surreal,” McFarland said. “Moving as far away as I am for college, it’s going to be one last ride.”

The Alabama High School Directors and Coaches Association announced the rosters of the two teams last Thursday. Two teams will be made up of 37 players who are set to graduate in 2020.

The South squad holds an advantage over the North, leading the series 22-19. The South team won last year 22-19 to snap a four-game winning streak for the North.

“I’m really honored to be a part of this,” McFarland said. “I’ll put out my best. I have already been training for college. I’ll pretty much be playing in a college game. I’m really excited for it and can’t wait to see how it is.”

McFarland played on both sides of the ball for the Eagles last season. He spent time playing on both the offensive and defensive line. Although he likes tracking down ball carries, McFarland’s true love is blocking for his quarterback.

“I really liked playing right tackle,” McFarland said. “I felt really comfortable there. Defensively, I really enjoyed playing defense, but I always had the mindset of an offensive player.”

McFarland learned to love and play the game from some influential coaches during his time at Goshen.

“Coach Kerry (Coston), in his one year that I had him, I learned so much from him,” McFarland said. “Ever since I got here in the eighth grade, coach Mike (Wilcoxin) has always been by my side working with me.”

Even though McFarland isn’t able to work out with teammates or get on the field to run drills due to the threat of COVID-19, McFarland is still getting his work in.

“I have been training, running and working out a little bit,” McFarland said. “Now, I’m going to step it up a little bit. I don’t know if this game is going to happen, but I’m still training because of college.”

Even if he can’t get on the field to play the game, the fact that he was chosen to participate gives McFarland some added confidence moving up to the collegiate level.

“It makes me feel that I earned my way to college,” McFarland said. “I worked it and this just proves it.”