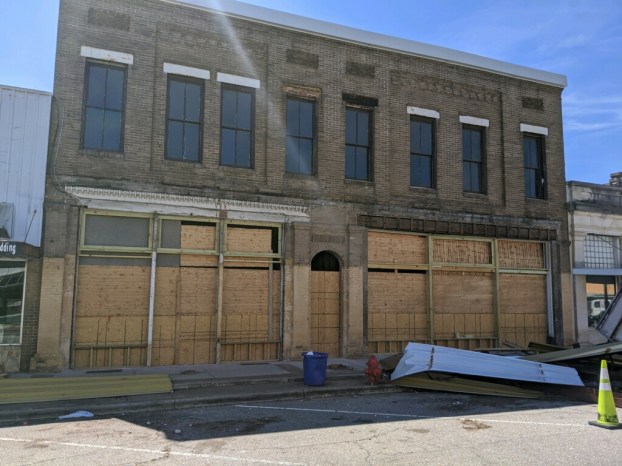 The facade of the Bass Family Mercantile store was revealed as part of a massive restoration project headed by John and Vicki Kennedy. The building has long been a fixture of South Main Street in Brundidge and the couple hopes to restore it to life.

The walls came tumbling down.

Traffic came to a standstill and people left their places of work.

All in awe of what they saw.

Since the 1960s, metal sheeting had hidden the grandeur of the Bass Family Mercantile Store on South Main Street in downtown Brundidge.

But, when the beauty of the historic brick building was revealed, it quickly became the talk of the town.

The restoration project for John and Vicki Kennedy will include upstairs office spaces for him and their son, John Jake Kennedy, a Wall Street investment banker. The downstairs will be devoted to Vicki’s Starlight Glass Art Studio and shop.

The Kennedys also have purchased the Victorian home on S.A. Graham Blvd. that once belonged to Dr. Reynolds, who at that time, was one of four doctors in the small, South Alabama town.

The Kennedys have roots in Florida and family roots in the Alabama cities of Athens, Thomasville and Limestone.

“Although we lived in Florida, when we had time off from school, our parents would load us up and we would ‘go home to Alabama,’” John Kennedy said. “We love Alabama.”

Now, the Kennedy’s are “at home” in Alabama and they are excited about the future they envision for the small Pike County town of Brundidge.

“Brundidge is only one mile off U.S. Highway 231 while so many small towns are far off the beaten path,” Kennedy said. “Being close to a major highway is the saving grace for Brundidge.

“The idea that we have to bring traffic off Highway 231 into Brundidge is for us to offer things to do, things to create, rather than things to buy.”

And the Kennedy’s have just a place for expanding the arts.

They also purchased the two-story building on S.A. Graham Blvd., that is just a stone’s throw from the Main Street crossroads.

“John Jake’s wife is an off-Broadway actress and that building work make an outstanding open-air theater,” Kennedy said. “There are so many possibilities for a town the size and location of Brundidge.“

Kennedy said he and his family are excited to be in Brundidge and to be a part of what it can become.

There’s the matter of a facelift for the Bass Family Mercantile building. Although somewhat scarred, the brick building has maintained its original grandeur. There will be three entrances to the building and 32 windows upstairs. The ceiling tile has been restored and the inside brick walls revealed.

Hopefully, the restoration of the Bass Family Mercantile will be encouragement for others, who own buildings within the city, to bring them back to the way they used to be. And to where Brundidge can be.

The Kennedys said the citizens of Brundidge have been warm and welcoming and they look forward to being a part of the city’s bright future.