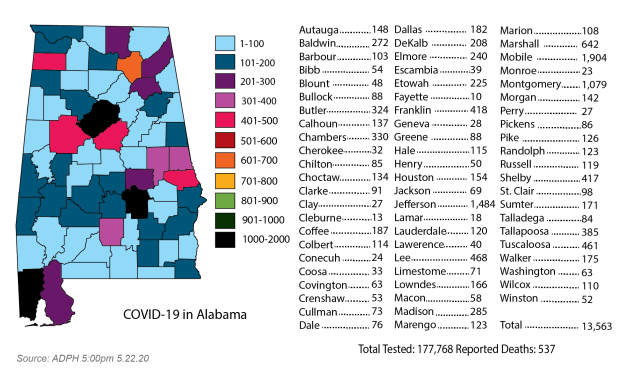 Pike County recorded more than 20 new cases of COVID-19 this week, including both a resident and an employee at a local nursing home.

“As of 4:45 p.m. Friday, the Alabama Department of Public Health reported 126 confirmed COVID-19 cases in Pike County, with no deaths; on May 15, the total for Pike County was 103. The ADPH reported more than 13,560 cases statewide in a week that saw increases of more than 300 new cases daily and further lifting of public safety restrictions to open the economy.

“There are some people thinking we’re on the other side of this, and we’re not,” said Jason Reeves, Troy mayor.

Troy Health and Rehabilitation Center reported confirmed COVID-19 cases in both a contracted housekeeping worker and a second resident this week. Another resident had tested positive in April and has recovered.

Kelly said the employee will remain in isolation at home for a minimum of 14 days and will require a negative COVID-19 test prior to returning to work.

The facility was notified on Thursday that a second resident has received a positive diagnosis for COVID-19.  “The resident is receiving appropriate medical care,” Kelly said. “We have ordered COVIDI-19 test kits in order to test every resident on that specific unit as a precaution.

Rick Smith, CEO at Troy Regional Medical Center, said continued increases in positive tests and hospitalizations should serve as a warning that “we’re not out of the woods on this.”

“We’ve probably had another six or eight people who have been hospitalized due to COVID-19,” he said. “And when you look at the numbers, the state has reported more than 300 new cases in 10 of the last 14 days … that shows you this isn’t going away.”

An Associated Press analysis of testing data from The COVID Tracking Project showed that, over the past 14 days, the situation in Alabama has gotten worse. New daily cases have risen to 304 from 268, and the positivity rate of daily tests has increased from 6.7% to 7.6%. The AP used seven-day rolling averages to account for daily variability in the testing data. The data includes counts through May 20th.

Dr. Scott Harris, the state health officer, said the rate of positive tests in the state has decreased by the state’s count. He added, however, that people are still “safer at home” despite the loosened restrictions.

The new, loosened rules were announced hours after the state said claims for unemployment compensation during the coronavirus pandemic have topped 500,000 in Alabama.

Smith warned that as the state and local economy reopen and residents begin to gather, socialize and return to more normal activities, remaining vigilant is critical. “I hate to be the one beating that down, but it’s important,” he said, stressing that people with underlying health conditions such as asthma, diabetes or heart disease, as well as advanced age need to take extra precautions.

Reeves agreed. “My concern all along has been that when we begin to open up, people will behave as if there is no longer anything to be concerned about,” he said. “That is not what people need to take away from this.

“It’s a lot easier to stay healthy when you’re at home. As these things change, people need to continue to practice social distancing and safety practices … and as our economy reopens, it has to be done with an eye toward health and safety.

“We’re walking the line right now of trying to continue to improve our economic situation without getting into a deeper health care crisis.”