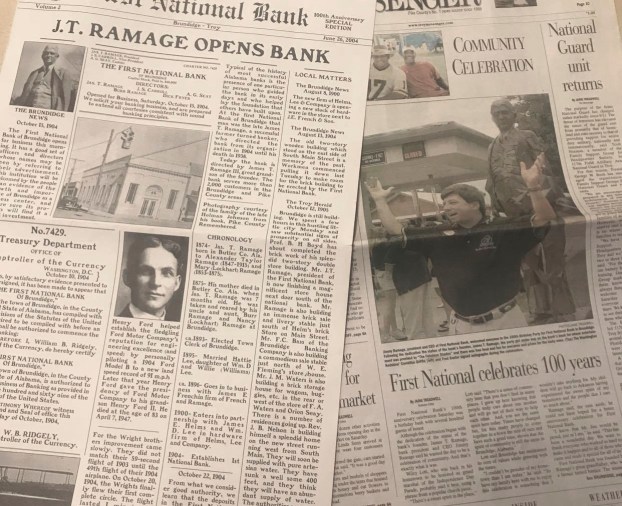 Jimmy Ramage, FNBB board chair, said  its customers have always been the heart of First National Bank.

“We take great pride in  the level of service that we offer,” Ramage said. “While most combinations always lead to some change, we are working hard to make the merger of TB&T and FNBB seamless. We expect to keep all existing TB&T and FNBB locations open for business and no staffing changes are planned.”

For the first time since 1900, the City of Brundidge does not have a locally owned bank.

Ramage said this is a new situation for him as well as for the citizens of Brundidge.

However, the downtown bank will continue to operate as usual and with the same hometown service.

“My great granddaddy, James T. Ramage, opened the First National Bank in Brundidge on October 15, 1904,” Ramage said. “I was president and CEO when the bank celebrated its 100th anniversary on Saturday, June 26, 2004. That was an honor for me and a great celebration for our town and all of our customers. We are looking to celebrate another 100 years as TB&T.”

Ramage neither he, nor his three cousins who are the primary stockholders in FNBB, were looking to sell the bank but, once the opportunity was presented, it was decided that it would be a good and wise decision for all concerned to merge with TB&T.

Troy Bank and Trust Company and First National Bank of Brundidge share more than 250 combined years of banking. Both remained independent banks through those years with concentrated efforts to serve their communities.

“That commitment will never change. We will continue to serve our customers and continue to work hard every day to be ‘the only bank you’ll ever need,” Ramage said.

However, the merger was not done without some reservation.

“Our roots run deep,” Ramage said. “Brundidge was founded in 1851, and, according to the Brundidge newspaper, there was a great deal of interest in a local bank in the 1880s. Back then robberies were rather common and people were wanting banking services of some kind.”

The Brundidge Banking Company was formed in 1900. Brundidge was a growing town and, thoughts were that it could accommodate another bank.

James T. Ramage had grown up as a working man among hard working people. He understood the work ethic that his parents had instilled in him. So, Ramage said it was understandable that his great-grandfather would be willing to open another bank to serve the community.

“Daddy Jim was a young man when he went to borrow the money to open a bank,” Ramage said. “I still don’t understand how he was able to get the backing he needed but he was successful in getting what he needed.”

James T. Ramage was a farmer turned banker and he was successful at both.

The Brundidge News reported “the institution will be welcomed by the people as an evidence of the growth and importance of Brundidge as a business center and we are sure its promoters will find it a paying investment.”

“Daddy Jim’s mother died when he was an infant,” Ramage said. “He came to Pike County around 1893 to live with his aunt and uncle Mr. and Mrs. Burr Ramage.”

In time, James T. Ramage earned the reputation of an outstanding business man and an influential community leader.

He was president of FNB of Brundidge and also a stockholder and director in the Brundidge Banking Company. He was one of the largest land owners in the county and his farming and business interests were extensive.

The family patriarch died at the age of 63, leaving his wife, Mrs. Hattie Lee Ramage, and four grandchildren.

“Both of Daddy Jim’s children died as young adults and left four young children,” Ramage said. “Wanting to make sure his grandchildren were taken care of, the bank stock was left to them in a life estate, so that’s how it was that, we, the four great-grandchildren were the ones to make the decision on selling the bank.”

Ramage said the decision was made with careful consideration and with confidence that FNBB will continue to serve the Brundidge community as always as TB&T.

“We look forward with assurance and we, at FNBB, want to thank our customers and the Brundidge community for its support over the many years and look forward to another 100 years of banking in Brundidge.”