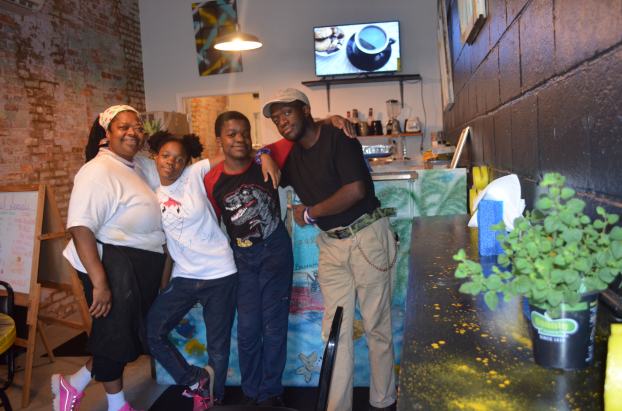 J’ean Collins, Bahamian and Bama chef, is the owner of Island Girl Cafe in downtown Brundidge. It’s a Bahamian restaurant with a Bohemian flair. Pictured with Collins are her children and her right hands, Shekinah, Immanuel and Rachel. Just drop in and dine in or take out.

J’ean Collins was born and grew up in the Bahamas.

She laughingly said she is a Bahama Bohemian.

“Bohemian means that I’m a character, that I’m eccentric ” Collins said, laughing, heartedly, as she rose from her resting place after an exhausting but exhilarating day at Island Girl Cafe in downtown Brundidge.

“This was supposed to be a soft opening,” she said with more than a hint of pleasure. ‘I’m flustered! I didn’t expect it to be so quick. We were running out of too many things. But that was good.”

Island Girl Cafe iss long and narrow and has the feel of an island restaurant.

How could the restaurant appear any other way with artwork bright with the colors of the Bohemian flag and the simpleness of island folk art.

The brightly colored tables are cable spools and there’s wall art to match.

Although it was after rush hour, the aroma of the lunch menu lingered, tempting late comers to “come back tomorrow.”

Chef J’ean is the cook in the kitchen and that’s the way it has to be. She doesn’t cook by recipes so “who else?” And, too, she has the experience of cooking from the Bahamas to New York City. She has cooked for the public and she has catered private parties, and she owned and operated Fish Bones in Troy for a while. But wherever she cooks, “Prayer rules the kitchen,” Collin said with a bold Bahamian accent and a broad South Alabama smile.

The cakes on the counter are as tempting as the aromas drifting from the kitchen.

All the cakes are good and all are favorites even those that are upside down — the fruit upside down and the blueberry.”

And there is chocolate cake and Spice Island cake and Nigerian cakes.

And, for the stuff that sticks, Chef J’ean offers the taste of the Bahamas ox tails and for the lest adventurous, shrimp and grits, boiled fish and Johnnycakes. How about Bahamian stew fish and clam chowder or maybe pigeon peas and rice and something called souse?

And for those who just want something Southern, there are chicken wings and other things local.

Those who enjoy adventurous eating and have a little Bohemian in their DNA will find that Island Girl’s is the in place to dine.