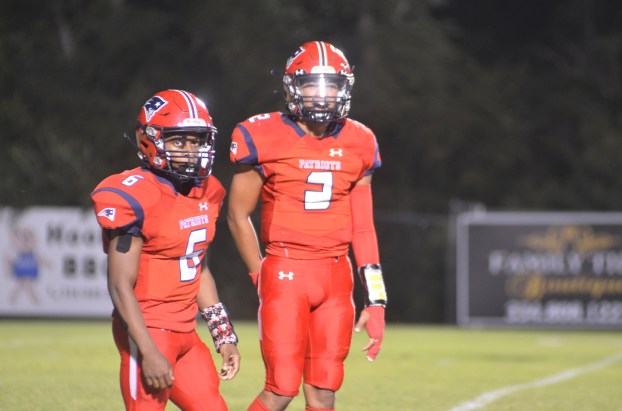 photo/Mike Hensley | The Messenger Aaron Greenwood (left) and Mayes White (right) look to the sideline for the play call.

Patriots score early and often in win over Hooper

The Pike Liberal Arts Patriots scored on the opening kick and rode the early lead to a 49-0 win over region foe Hooper on Friday night in Troy.

The Patriots move to 2-0 on the season.

After going into halftime holding a slim 7-6 lead last week, the Patriots have outscored their opponents 84-6.

“We just had to believe in what we are doing and do what we can do,” head coach Mario White said. “They love one another and play for one another. The biggest thing is we realize we are all on the same boat and under the same roof.”

Mario Davenport wasted no time getting the Patriots on the board. After bobbling the opening kickoff he scooped up the football and ran it back for an 85-yard touchdown, giving the Patriots the early 7-0 lead.

On the first play of the their first offensive possession, quarterback Mayes White connected with Elijah Caldwell for a 60-yard touchdown and Pike took a 14-0 lead less than three minutes into the game.

The Patriots scored two more touchdowns in the opening quarter beginning with a 41-yard run by Aaron Greenwood. They closed out their first quarter scoring on a 23-yard completion by Jay Taylor and took a 28-0 lead into the second.

Greenwood scored his second rushing touchdown of the game, this time from 75 yards out, giving the Patriots a 42-0 lead heading into the half.

The Patriots emptied their bench in the second half, giving key playing time to the Patriot reserves.

“We had a lot of eighth and ninth graders come out and play,” White said. “I feel like that’s how you build a program. I let them have a good time with it and get some game time experience.”

Freshman quarterback Parker Adams got into the game in the second half. He gave the Patriots their final points of the night when he connected with Davenport for a 12-yard touchdown.

The Patriots finished with 493 total yards. Greenwood finished with 223 rushing yards to go along with his two touchdowns. White threw for 270 yards. Caldwell finished with 159 receiving yards.

The Patriots will remain at home next week to take on another region foe in Lee-Scott.

“Lee-Scott is always a physical team,” White said. “They have always come to play. We will take Saturday off and spend time with our families. On Sunday after church we will get ready to go.”