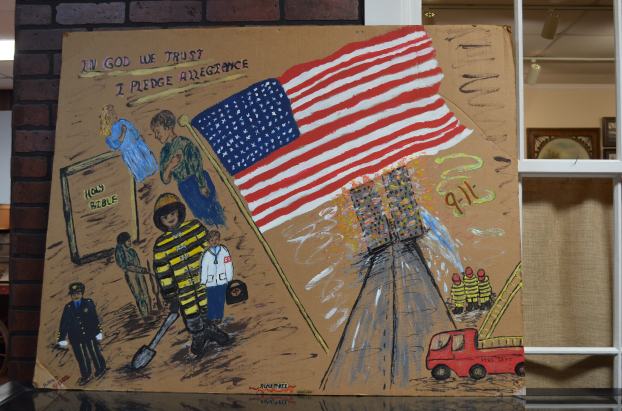 On September 11, 2001 Betty Oliver walked across the hall to the break room at the Highway Department in Troy and viewed what was too horrid to be reality.

“What I was seeing on the television screen was unreal,” Oliver said. “Those buildings being hit by airplanes. I couldn’t believe what I was seeing.”

Oliver went home that night feeling as if she should do something but what could a lady in Springhill, Alabama do amid such tragedy?

Oliver’s mother and grandmother enjoyed painting. A large piece of cardboard was handy. So, Oliver “painted” her feelings of 9-11.

“There’s a flag, or course, and a Bible and the burning buildings,” she said, “A fireman and a policeman and a doctor.”

For the feelings she couldn’t express with representation, there were the words, “In God we trust” and “I pledge allegiance.” And, “Remember.”

Today, Betty Oliver’s painting on cardboard, is reminder of the day two planes were flown into the Twin Towers of the World Trade Center.

Almost 3,000 people were killed during the terrorist attacks.