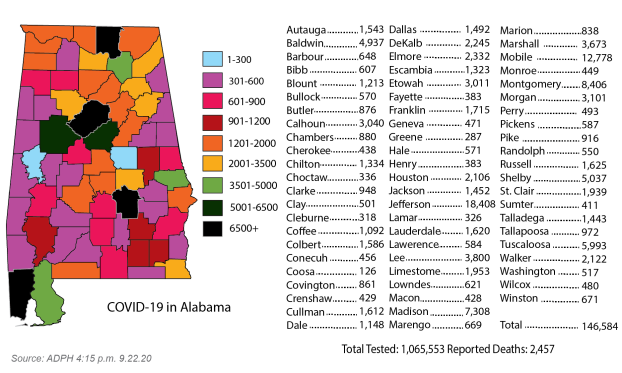 A feared increase in Alabama’s coronavirus caseload after Labor Day get-togethers has yet to materialize two weeks after the holiday, leaving health officials cautiously optimistic.

While new cases are being confirmed daily and about 240 people have died of COVID-19 since the first weekend of the month, the state’s daily caseload has declined a little instead of skyrocketing. The head of the Alabama Department of Public Health, Dr. Scott Harris, said he’s “pleasantly surprised.”

“I would say we’ve not seen a big spike from Labor Day,” Harris told a media outlet.

Alabama’s rule requiring facial coverings in public for anyone who can’t remain 6 feet (1.83 meters) away from others made a difference, said Dr. Donald Williamson, president of the Alabama Hospital Association.

“More people wore their mask while engaging in gatherings around Labor Day, and I think that as a direct result, we are seeing fewer hospitalizations and we might have feared,” said Williamson.

Hospitalizations in Alabama are at roughly the same level as before the July 4 holiday, which was blamed for a summertime increase in cases, Williamson said.

While no confirmed cases of COVID-19 were reported in Pike County on Tuesday, 22 new probable cases were added, bringing totals to 916 and 256 respectively, with eight confirmed deaths. Pike County’s 14-day positive rating dropped to 7.99 percent

Alabama has had 2,457 deaths from COVID-19, the illness caused by the new coronavirus, according to researchers from Johns Hopkins. The state’s death count is the nation’s 21st highest.

But over the past two weeks, the rolling average number of daily new cases has decreased by 8.6%, even as the seven-day average for tests taken has increased. There were 262 new cases per 100,000 people in Alabama over the period, which ranks 12th in the country, according to Johns Hopkins.

The virus causes mild to moderate symptoms for most people, but it can be deadly for the elderly and people with serious health problems.