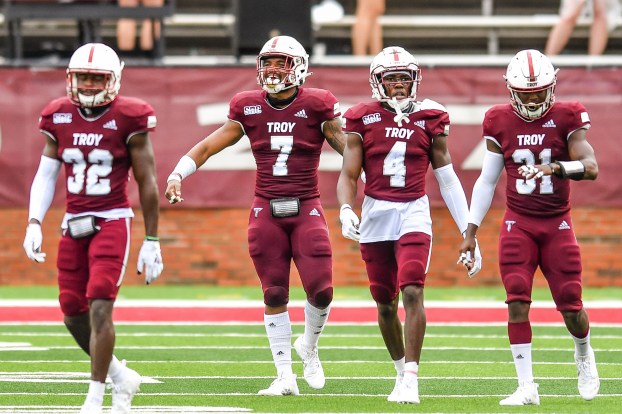 photo/Joey Meredith | The Messenger The Troy defense on the field against Texas State on October 10. The Trojans will be back in action on Saturday when they host Eastern Kentucky.

Troy takes on Eastern Kentucky at the Vet.

The Troy Trojans remain home for their second of three-straight home ganes to take on FCS opponent Eastern Kentucky on Saturday afternoon.

After opening their home schedule with a win against Texas State last week, the Trojans (2-1, 1-0) hope to make it two in a row against the colonels at Veterans Memorial Stadium.

“I was really proud of our team and how we played last Saturday,” Troy head coach Chip Lindsey said. “To get off to a 1-0 start in Sun Belt Conference play is really important for us. We handled the distraction of getting our previous game [against South Alabama] rescheduled really well and refocused nicely. Then, the weather last Saturday was a concern the whole time, but we handled it well. I’m really excited about how our team responded. It’s a sign of a mature team when you have the ability to handle the factors you cannot control. We came out and played with a lot of passion and energy. We were really excited to play which always goes a long way towards winning a game.”

This week’s game features a Colonel team that is 1-3 on the season and is coming off a 33-30 loss to Houston Baptist University.

This will be the second all-time meeting between the two schools. The Trojans defeated the Colonels 21-12 in 1997.

“We get to play at The Vet again this week against one of the best programs in the FCS historically,” Lindsey said. “They have a history of winning championships and they’ve done that for a long time. It shows their commitment to winning and what kind of football program they have that they’re playing this season. They do a great job and they’re going to come in Saturday ready and excited to play. We need to make sure we match their energy level and excitement.”

After finishing with less than 200 yards against BYU late last month, the Trojans bounced back Saturday when they finished with 488 yards against Texas State last week.

The Colonels come into the game allowing 40 points per game and over 530 yards of total offense.

The Troy defense ranks fifth in the Sun Belt Conference in points allowed and third in total defense. The Colonel offense is averaging 19 points per game and 320 yards.