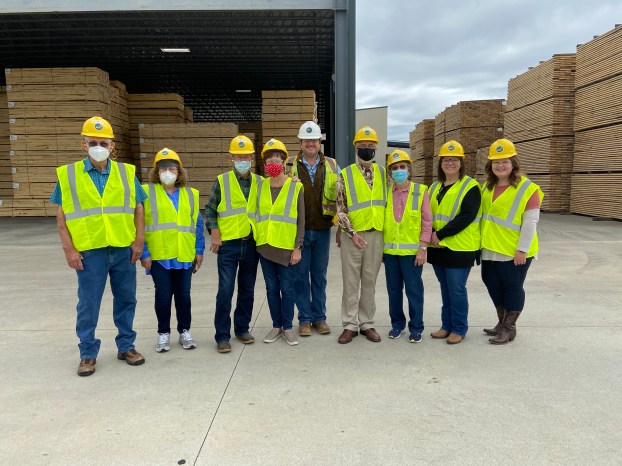 “The Pike County Chamber of Commerce Farm City Committee enjoyed the morning at Rex Lumber,” Aaron said. “The tour provided the opportunity members of the committee to learn and observe the way technology has advanced in timber production. It was a very interesting and informative tour.”

Committee members, Bobby Catrett and his wife, Pauline, came away from the tour very impressed with the Rex Lumber operation from the time the cut trees come onto the grounds until they leave as finished lumber.

“Rex Lumber has 160 employees, and most of those I saw were forklift drivers,” Catrett said. “If I remember right, they run about a million board-feet of lumber every week. To me, that ‘s very impressive.

“I was also impressed by how automated the mill is. The bark is cut off, the logs are graded and then they go different ways. They are cut in 2x’s – 2x4s, 2x6s on like that. The lumber that we see at Lowe’s is 2x yellow pine. Rex Lumber has its own kiln and they dry their own wood.”

Catrett said he was interested to know that Rex Lumber does not deliver to stores.

“Rex Lumber is delivered to a railroad yard in Dothan and it’s distributed from there to different suppliers,” he said.

Coming away from Rex Lumber, Catrett said he was impressed by the technology involved in “cutting wood” in today’s world.

“And, I was also impressed by the safety measures at Rex Lumber,” he said. “There was a time when a lot of people were killed working in sawmills. But the only person I saw touch any lumber at Rex Lumber was a quality inspector. They are really set on safety. It’s a big operation and big business for Pike County.”

For Farm-City Committee Member Rebecca Wilkes, the Rex Lumber tour was something she had been highly anticipating.

“There were so many grades of lumber and it was interesting how they took the bark off the trees and the different ways the bark could be used,” Wilkes said. “And, I was impressed by how computerized the lumber mill is. It was just amazing to see what those computers can do.

First, Wilkes said she was interested to learn about how the lumber mill works and then joined the tour of the mill even though it involved a lot of walking.

“I wanted to see the mill in operation,” she said. “It was a lot of walking and somebody pointed out that I was 90 years old. The Rex Lumber employee who was conducting the tour said I was the oldest person he had taken on a tour of the mill and would probably be the oldest he would take.”

The company tour guide presented Wilkes with a Rex Lumber hard hat and they had a photo taken together. The photo will be in an upcoming edition of the Rex Lumber magazine.

Wilkes was as impressed with the Rex Lumber operation as she was proud of her photo.

“It is amazing to see how a state-of-the-art lumber mill operates today,” she said. “Rex Lumber is a good thing for Pike County.”