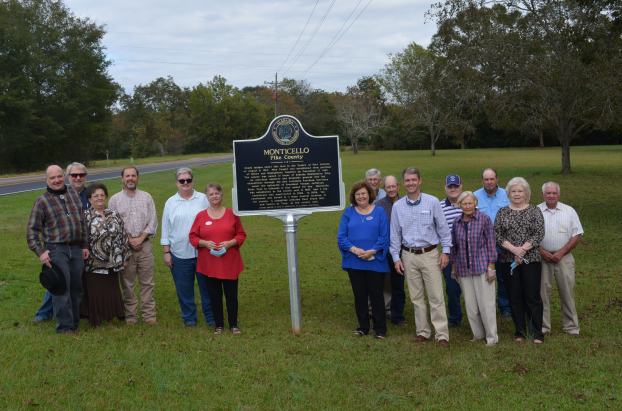 Jaine Treadwell | The Messenger Elected officials and members of the PIke County Historical and Genealogical Society gathered Sunday to dedicate the new historical marker in Monticello. State Rep. Wes Allen (R-Troy) helped secure a grant to replace the marker that went missing nearly a decade ago..

On Sunday afternoon, a gathering of Monticello area residents and those with keen interest in local history witnessed the posting of a historical marker designating Monticello as the site of Pike County’s first courthouse

Diane Smith, president of the Pike County Historical and Genealogical Society, said a historic marker was placed at Monticello by a local civic organization in 1954. However, the marker went missing about 10 years ago.

“Thoughts were that perhaps the marker had been removed by the highway department during road work but that was not the case,” Smith said.  “It was important that this site of historical significance be designated.

“The original marker cost $250 which was a lot money back then, but today, the cost of a replacement marker was $2,450. Pike County State Rep. Wes Allen (R-Troy) was able to help us get an Alabama Bicentennial Grant to fund the marker. We are most appreciative to him for his efforts in applying for and receiving this grant and also to those who made donations.”

Smith expressed appreciation to Meeksville Baptist Church for allowing the placement of the Monticello Historical Marker on church property. The placement is a visible and more secure location.

Allen said Sunday, October 25, 2020, was an important day of preserving the history of Pike County.

“It is important that we preserve our history, not erase our history and pull it down,” Allen said. “We need to remember what it means to be Pike County.”

Smith said additional language from the original marker was added to give more history of Monticello.

According to the historical marker, the Creek Indians ceded the land that is now Monticello in the Treaty of Fort Jackson on August 9, 1814. Pike County was established from portions of Henry and Montgomery counties in December 17, 1821. The county was named in honor of Zebulon Montgomery Pike, an American explorer and brigadier general who led expeditions through the new Louisiana Purchase territory under the authority of President Thomas Jefferson. Pike’s Peak in Colorado is also named for him.

Smith said the marker was erected Sunday in celebration of the Alabama Bicentennial, 2017-2019.