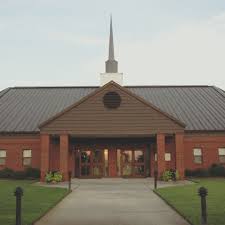 File Photo | The Messenger God’s Way Baptist Church on the Elba Highway will host a community-wide Halloween event on Saturday.

The Rev. John Milton has been pastor of God’s Way Baptist Church for only two weeks. Already, his love of children, not just the children of the church he pastors, but of all children, motivated him to make this harvest season special.

On Saturday beginning at 4 p.m., Milton and God’s Way Baptist Church will host a Halloween drive-through in the church parking lot and there will be more candy to share than even the Great Pumpkin could imagine.

Masks will be worn and the event will be held in a safe environment for all participants.

“We will give out candy until there is no more candy,” Milton said. We hope the event will be a blessing to all boys and girls.”

Being here in Troy is also a blessing to Milton and his wife, Kimberly.

“My parents, Sherman and Mary Milton, have lived in the Banks area for 20 years,” Milton said. “The Lord opened the door for us to be here, too. It is a blessing to be here with my parents.  Of course, we have been coming to Alabama often over those 20 years. We have seen how Troy and Troy University have grown. We are very happy and blessed to be here.”

Milton grew up in Wildwood Florida and joined the Air Force soon after high school graduation. He was an air traffic controller and was stationed in Grand Forks, North Dakota. Then, he was accepted into Officer Candidate School with the U.S. Coast Guard and later accepted into Flight School.

Throughout his military years, Milton had opportunities to work with youth ministries from North Carolina to Alaska. And to grow in his faith.

But, during all that time, Milton realized that God had a plan for him outside the military.

In 2005, he retired from military service and willingly followed the plan God had for him in full-time ministry.

Now, 15 years later, after serving the Lord “one small church at a time,” John and Kimberly Milton are where God has a special place for them, at God’s Way Baptist Church, near his parents and “at home” in Troy, Alabama.