Patriots ready to play for a state championship 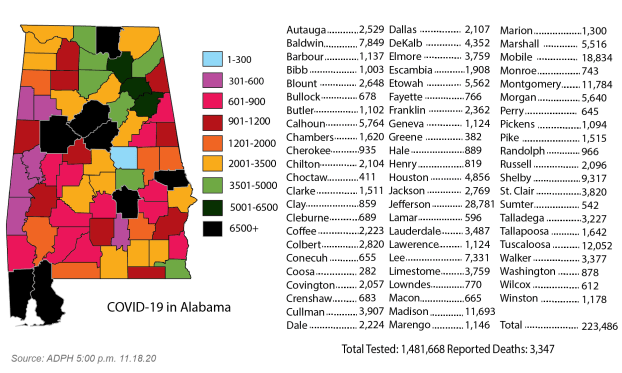 Is coronavirus out of control in Alabama?

BIRMINGHAM, Ala. (AP) — The new coronavirus is spreading so quickly through Alabama that COVID-19 is rampant and there’s little hope of real improvement until weeks after the holidays, despite the hope presented by new vaccines, health officials said Wednesday.

“It’s out of control,” said Dr. Donald Williamson, the president of the Alabama Hospital Association and former director of the state health agency.

The rolling daily average of new cases over the last two weeks has increased by 684, a jump of about 50%, according to researchers at Johns Hopkins University, and one in every 342 people in Alabama tested positive in the past week. More than 3,300 people have died since the coronavirus pandemic began, state statistics show.

Troy University reported six new student cases at its Troy campus on Wednesday, pushing the total number of student cases to more than 650 since August.

While Gov. Kay Ivey has extended an order requiring face coverings in public through Dec. 11, she also lifted occupancy limits to help businesses. Bars, restaurants, stores and churches are again filling up in populated metro areas, and face masks are rarely seen in some rural locales.

With Thanksgiving next week and the Christmas season on its heels, officials fear large gatherings of families and friends will spread the virus even more and result in a wave of illness that won’t diminish until late January at the earliest, even though a relatively small number of people could begin receiving vaccines in December.

Speaking during a virtual news conference with Sen. Doug Jones, Dr. Jeanne Marrazzo of the University of Alabama at Birmingham said testing has decreased since the summer, helping lead to an increase in the percentage of tests that are coming back positive.

Still, some hospitals already are hiring traveling workers from out-of-state to help care for patients, he said, and a few are attempting to hire workers from other countries to fill gaps caused by high caseloads and workers who’ve gotten sick themselves from the virus or are fatigued after months of fighting the pandemic.

“Every hospital I talk to, their biggest problem is staffing,” said Williamson.

The head of the Alabama Department of Public Health, Dr. Scott Harris, told a news conference in Montgomery on Tuesday that hospitals were currently “within capabilities,” but he urged people to be particularly careful during the holidays.

“My family has decided not to have a big in-person Thanksgiving this year as much as we’d all like to see each other,” said Harris. Small, outdoors gatherings are best, he said, and anyone not eating or drinking should wear a mask.

COVID-19 causes only mild or moderate symptoms in most people, and at least third of the people with the virus aren’t aware they have it and can spread it, Harris said. The illness is most dangerous for the elderly and people with other health problems.

Follow AP news coverage of the coronavirus pandemic at http://apnews.com/VirusOutbreak and https://apnews.com/UnderstandingtheOutbreak.