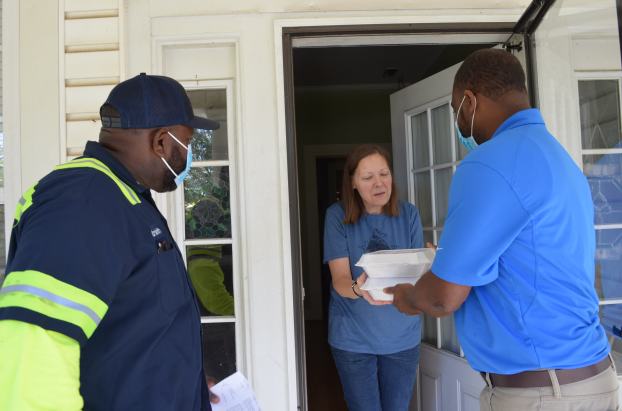 Members of the Brundidge Rotary Club and other volunteers delivered Thanksgiving meals to the elderly and shut-ins in the Brundidge area. More than 500 meals were delivered or picked up curbside at Brundidge Station. Above: Willie Wright and Markeith Blakely deliver meals to a caregiver for a local couple.

Neither rain nor sleet nor COVID-19 have kept the Cornelius Griffin family from hosting a Brundidge community Thanksgiving dinner for the elderly and shut-ins.

When Griffin, a standout football player for Pike County High School and the University of Alabama, signed with the  New York Giants of the National Football League, he did not forget his hometown nor the townspeople who supported  him through the years. So, in 2001, he and his family began hosting the annual community Thanksgiving dinner at Brundidge Station.  The dinner has continued every year since, including 2020, an unprecedented year.

The Griffins’ Thanksgiving dinner on Tuesday was different this year because it had to be, said Martha Griffin, the family matriarch.

“Because of the pandemic, we could not have people come in to enjoy the dinner,” Griffin said. “So, we had curbside pickup and delivery.”

Around 11 a.m. more than 500 Thanksgiving dinners had been picked up or delivered by the members of the Brundidge Rotary Club and other volunteers. And, still boxes were stacked for pickup or delivery.

Cornelius Griffin supplies the turkeys and hams and members of Lily White and  Jerusalem churches supply  and/or prepare the homegrown “trimmings” —dressing, turnips, collards, potatoes, sweet potato shuffle, and cakes , pies and rolls and cold water cornbread.  A feast for a king, it could be said.

Martha Griffin said Robert Boyd grows and greens and the ladies of the churches most often prepare the vegetables  and desserts at home.

“It takes a lot of time and work but we have a very willing group of people contribute to the Thanksgiving dinner every  year,” she said. “We couldn’t do it without them.”

On behalf of the Griffin family, she thanked all those who help make the annual Brundidge Community Thanksgiving

Dinner possible. She said, surely, it gives Thanksgiving even greater meaning for then all.

“I thank the Griffin family for hosting the annual Thanksgiving dinner and all of the volunteers,” Wright said. “And, I  thank God for the opportunity to be a part of the Brundidge community, first as the principal of Pike County High School  and now with the city. I am thankful for the opportunities to give back to our citizens and also to serve as a role model  for young people and show them there are many ways to give back to their community other than monetary.” 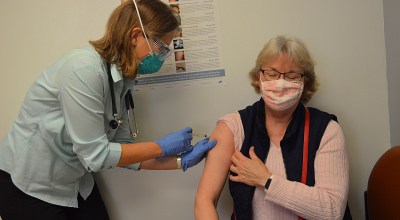 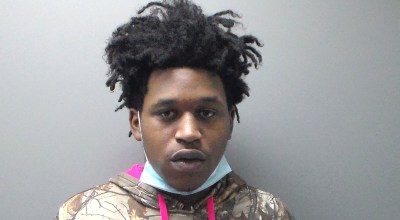