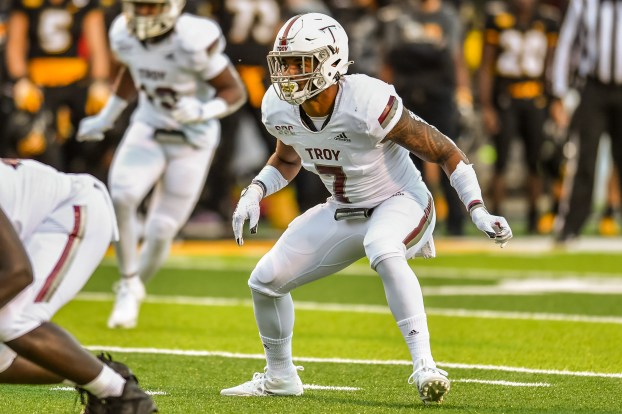 “We didn’t play very well tonight,” head coach Chip Lindsey said. “We had a little spurt in the second quarter. We can make all different types of excuses, but at the end of the day, we just aren’t playing good football. We have to keep challenging our team, stay focused and flip the switch tomorrow.”

App State (7-2, 5-1 Sun Belt) struck early and often with a touchdown on its first two possessions, followed by a pick-six to open with a quick 21-0 lead over the Trojans. The Mountaineers took a 28-0 advantage with a 22-yard touchdown strike from Zac Thomas on the first play from scrimmage to begin the second quarter.

Troy’s offense finally found a rhythm midway through the second quarter after a 27-yard field goal from Evan Legassey capped a 13-play, 66-yard scoring drive for the Trojans. On Troy’s next drive, Gunnar Watson found Kaylon Geiger for a 33-yard touchdown strike to cut into the App State lead.

The Trojan defense also found a foothold in the second quarter holding the Mountaineers to two second quarter field goals to trail 34-10 heading into the break.

App State continued to find offensive success with two more touchdown passes from Thomas in the third quarter to extend its lead to 47-10 at the end of the quarter.

Parker McNeil and Kyle Toole made their Trojan debuts in the second half with each seeing a drive at quarterback. Troy possessed the ball for nearly the entire fourth quarter and closed the game on a 16-play, 77-yard drive that lasted 11:42 and consisted entirely of rushing plays.

Watson finished 13-for-20 for 125 yards with a touchdown and an interception while Jamontez Woods led the Trojans with 43 rushing yards to go along with 15 receiving yards. Seven Trojans registered a reception during the game, led by Geiger’s 41 yards on three catches.

Thomas went 22-for-29 for 279 and four touchdowns at the helm of the App State offense while Camerun Peoples led the ground game as the contest’s leading rusher with 95 yards on 10 attempts. Malik Williams was the Mountaineers’ leading receiver with seven catches for 113 yards.