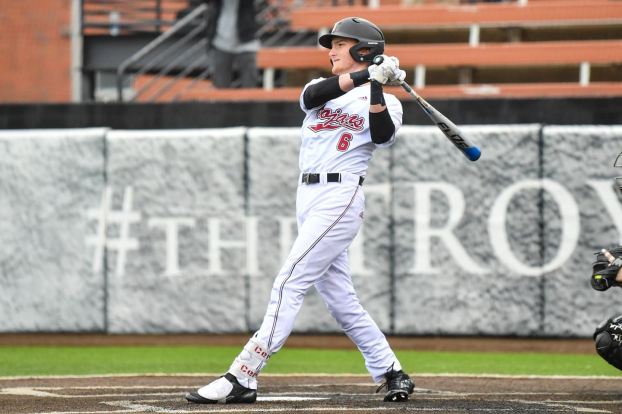 The Troy Trojans look to bounce back from Sunday’s loss to Youngstown State when they take on in-state rival Alabama-Birmingham on Tuesday night at Riddle-Pace Field.

The Trojans, after winning comfortably the first three games in their series against Youngstown State, fell to the Penguins 4-2 in the finale on Sunday.

During the four-game series the Trojans hit a total of 10 homeruns. Logan Cerny, who saw his first action of the season in the second game of Saturday’s double-header hit three homeruns and two doubles in that game and had seven RBI. His 16 total bases in the game tied a school record, which was set in 1990. Cerny was the first Trojan to hit three home runs in a game since Jo-El Bennett did so in 2014.

Cerny was named one of Collegiate Baseball’s National Players of the Week on Monday.

The Trojans will welcome in a Blazer team that began the season with a series win over Valparaiso in Birmingham over the weekend. After losing in the season opener, the Blazers bounced back and picked up an 8-2 win and a 4-1 win.

Kyle Gamble will get the star for the Trojans. He’ll be opposed by Austin Bohannon.

First pitch is scheduled for 6 p.m.