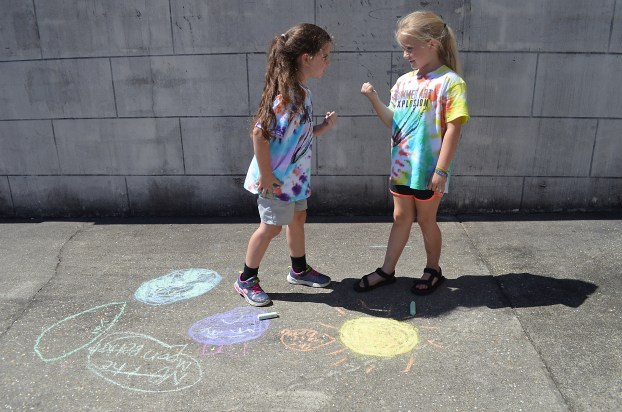 Jaine Treadwell | The Messenger Zoie Nonnemann, left, and Maribeth Stephens tapped into their emotions by arguing over which was better, the sun or the moon. After their discussion, they put their emotions on canvas by painting the sun and moon at the EXPLOSION! Summer Art Camp.

Those who traveled along East Walnut Street this week probably witnessed an “EXPLOSION!” near the Johnson Center for the Arts.

Tori Lee Averett and Day Barnes set off the “EXPLOSION!” when they decided to hold a Summer Art Camp “at the tracks” June 14-18.

The youngsters who experienced the “EXPLOSION!” learned that art is more than drawing and painting. It’s the many ways of expressing feelings and deep emotions. And, telling stories is an art, too.

On Wednesday, the girls ventured outside with chalk in hand to settle a quarrel between the sun and the moon.

“They were fighting about which one was better,” Zoie Nonnenmann said. “The sun said it was the best and the moon said, no, it was.”

But soon the quarrel was over.

“The sun is good in the daytime and the moon is good at night,” Maribeth Stephens said. “So, they are both good.”

The young art students decided that things like the sun and moon can be different and both can be good. “The sun and moon are brother and sister,” said Caroline McDaniel.

“And, they are friends, too,” Kennedy Bell said.

The boy artists worked inside and also learned about contrasting colors and how colors tell stories.

“The sun is warm; so, it’s yellow,” said Austin Dykes.

If there were any differences between the sun and moon, David Dawson brought them together with a shared mustache. Ellis Averett painted sunglasses on his sun and moon so what they saw was just the same.

And, to a one, boys and girls said summer art camp was “FUN!”

Barnes said Summer Art Camp “EXPLOSION!” was a great success and art classes will resume at Art by the Tracks in late August. To know more about the art classes, call or text 207-2662.