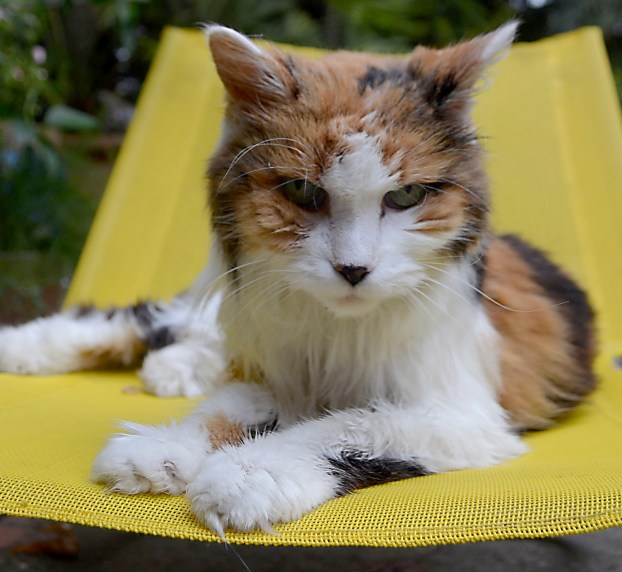 At the age of 19, Brandy Grace Pinckard is a three-time Calendar Cover Girl.

But, Kenny and Elaine Pinckard loved their precious Cover Girl just as dearly when she was a rescue cat from the hinterlands of Ohio.

The Pinckards had long enjoyed having cats around, especially rescue cats at their barn. But, for a house companion, they preferred a calico but not just any calico.

“There weren’t many rescue calicos to be found so we were fortunate to locate one in Ohio,” Elaine said. “A preacher and his wife had a rescue ministry and rescued a calico that was found riding on the hub of a construction worker’s trailer. She had no hair; she was pregnant and in great need of care and love.”

The calico remained at the rescue mission for about two years before the Pinckards had the opportunity to open their home and their hearts to the rescue cat.

“Brandy Grace has been a part of our family for 16 years,” Kenny said. “We’re not sure how old she actually is. She has some health problems so now she just mainly sleeps. We are fortunate to have had her this long.”

At one time, Brandy Grace weighed 16 pounds. Now she’s down to six.

Brandy Grace was declared the winner of the Humane Society of Pike County’s 2022 Pet Photo Contest which ended on September 8. She tallied votes, edging out frontrunner Cooper, beloved dog of Benny and Susan Jinright, in the closing minutes of the contest. Brandy Grace tallied 2,265 votes which might be the most votes cast in the history of the Pet Photo Contest.

But, for the Kenny and Elaine Pinckard, the contest is not about winning; it’s about bringing awareness to the plight of unwanted and often abused animals in Pike County and in support of the humane treatment of all animals.

“The Annual Pet Photo Contest funds the humane society’s spay/neuter program that goes a long way in reducing the number of neglected animals in Pike County,” the Pinckards said and expressed appreciation to the HSPC for its continuing dedication and commitment to the humane treatment of all animals and to all those entered their pets and cast votes.