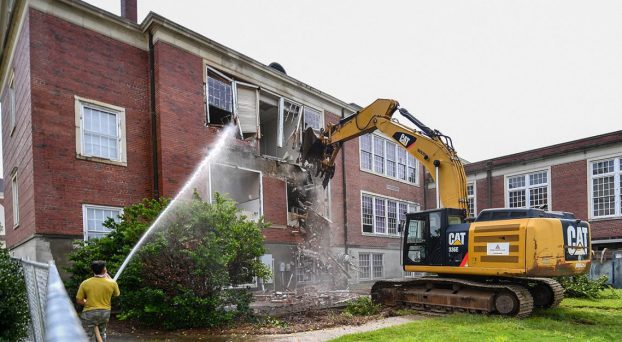 Troy University Demolition began on McCartha Hall last week. The new Center for Materials and Manufacturing Sciences will be built in its place.

Demolition began on McCartha Hall last week, paving the way for the new Center for Materials and Manufacturing Sciences on the Troy Campus Quad.

Built in 1950, McCartha originally served as the library building before being used for a number of programs over the years including the College of Education, the School of Business and, its last tenants, Social Work. It was also the long-time home of the Air Force ROTC program at Troy.

“We’ve got a venerable old hall that’s [will] come down but it will pave the way for a new Center for Materials Manufacturing Sciences that will be a state-of-the-art, world-class facility that is really going to take Troy University into the realm of research,” Senior Vice Chancellor for Advancement and Economic Development Walter D. Givhan said.

The demolition paves the way for a future that will allow our University to contribute to the many manufacturing operations in the state of Alabama, he said.

One such industry, KW Plastics, is homeported in Troy and is the world’s largest plastics recycler. Givhan also pointed to the state’s automotive industry and other industries that could benefit by the research conducted at Troy.

“We are excited about the research the Center has already done and the growth it has had that creates the need for additional space that will be provided by the new building,” Givhan said.

When completed, equipped and furnished, the building will cost about $12 million. Funding has come from a variety of sources including a grant from Gov. Kay Ivey through the state’s most recent bond issue, grants from the federal government and the National Institute of Standards and Training.

The Center was founded in 2018 with support from NIST and is a fully integrated multi-disciplinary research facility focusing on research into polymers and polymer recycling.

Givhan said the new building is expected to be complete by September 2023.

Earlier this summer, the university demolished Garnder and Hamil Halls and the Natatorium. A new Health and Human Services building will be erected on the Gardner and Hamil site. That building will house the school of nursing and kinesiology as well as all of the schools’ faculty and staff. The area where the natatorium was located will be replaced by a campus green space.