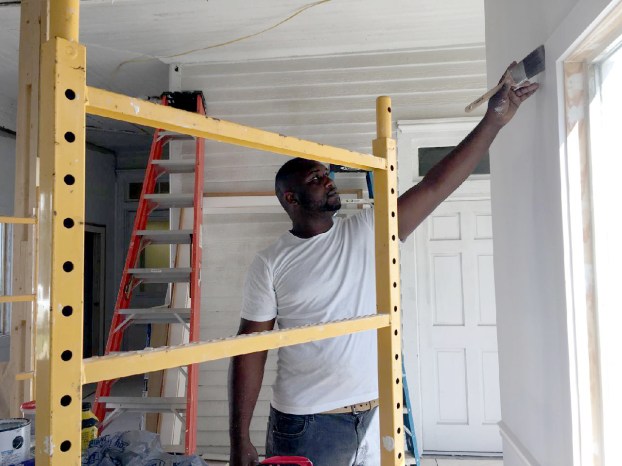 Jaine Treadwell | The Messenger The Tupper Lightfoot Memorial Library in Brundidge is using its Lowe’s 100 Hometown Grant to enclose an open walkway between it two buildings and a unique reading space. Work is moving steadily toward completion.

The banging of hammers and the buzzing of saws is an indication that improvements are being made at the Tupper Lightfoot Memorial Library in Brundidge.

The Library’s connector project is underway and is being made possible by a Lowe’s 100 Hometowns grant, which is an initiative to celebrate Lowe’s centennial. The Brundidge library was one of the 100 projects selected for the Lowe’s grant awards.

Theresa Trawick, library director, said the Tupper Lightfoot Memorial Library’s staff and patrons, join the City of Brundidge and its citizens in thanking Lowe’s for making it possible to enclose the raised, open walkway between the library’s two buildings.

“The enclosed walkway will make crossing from one building to the other safer for the children and more convenient for all our patrons. It will also be more workable for our staff,” Trawick said.

Karis Nicholson, circulation clerk, said Thursday that the building connector project is moving according to plan and, when completed, will be a great addition to the library.

Nicholson said the enclosed area will be more than a walkway.

“The connector space is large enough to provide an enclosed area for storage, which is much needed,” she said. “Plans are to use the open area for a coffee bar with small tables and seating along the street side. There will racks for magazines, newspapers and periodicals. The connector will be a space where our patrons can come to relax and read or enjoy the company of others.”

No date has been set for the completion of the connector project. But when the buzzing and banging cease, it won’t be long, Nicholson said.

The Tupper Lightfoot Memorial Library is located on the corner of South Main and Oak streets in downtown Brundidge. The library offers a variety of programs, activities and events for all ages. For more information, call 334-735-2145.