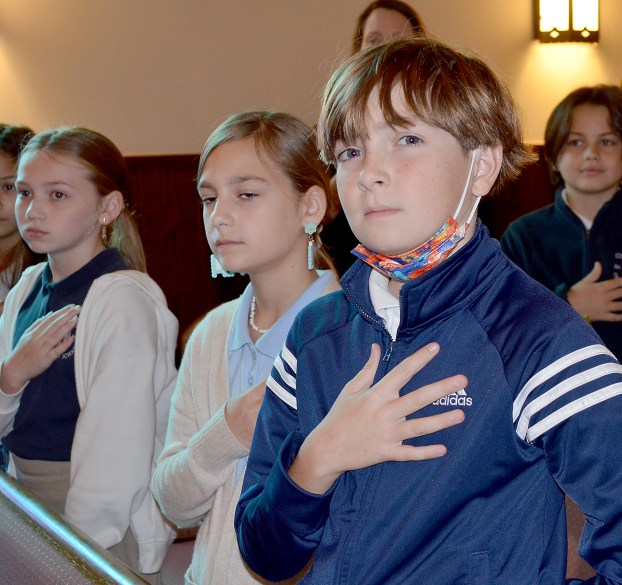 Jaine Treadwell | The Messenger (From left) Paisley Durant, Maddie Coleman and Turner Dixon place their hands over their hearts during the pledge of allegiance. The Covenant Christian School students were at a ceremony held by WoodmenLife during the dedication of a Honor and Remembrance flagpole at the school.

WoodmenLife is known for its patriot spirit and its dedication to keeping the American spirit alive with salutes to America’s heroes.

In welcoming students, teachers and guests, Jeff Moore, school administrator, acknowledged those who have sacrificed so that Americans can worship freely. And, it is good and right that Covenant Christian School honors them with the high flying of the American Flag.

Troy Mayor Jason A. Reeves shared childhood memories of learning about Jesus in the sanctuary where the dedication ceremony was taking place.

He also reflected on his personal feelings on the morning of September 11, 2001. As he saw the smoke billowing from the Twin Towers, he realized the awesome responsibility of being a son, a husband and a father.

“It was a scary time,” Reeves said. “That night, my wife and I prayed together to know where to turn when there seemed to be nowhere to turn. We found refuge in our Lord and Savior Jesus Christ.”

“We need to thank God every day that we live in this wonderful country where we can worship freely,” Reeves said. “Every time we look at the American flag, we should remember that flag stands for freedom of worship and we should never take that for granted.”

Charles Windham, WoodmenLife representative and Covenant Christian School grandfather, said the flagpole and the American flag were being dedicated in honor of the men and women of the United States military and to first responders to whom “we” go in times of trouble.

Windham expressed appreciation for Covenant Christian School and a city that support patriotism and honor the American flag.

“WoodmenLife members have presented more than 3.5 million American Flags to churches, schools and other community organizations,” Windham said. “On the local level, we also pay tribute to members of the military, both current and past, who selflessly protect America’s freedom and liberty. This ceremony also extends our unending gratitude to those who safe-guard our community-the firefighters, police officers, emergency medical technicians and other first responders. WoodmenLife is proud to salute America’s heroes.